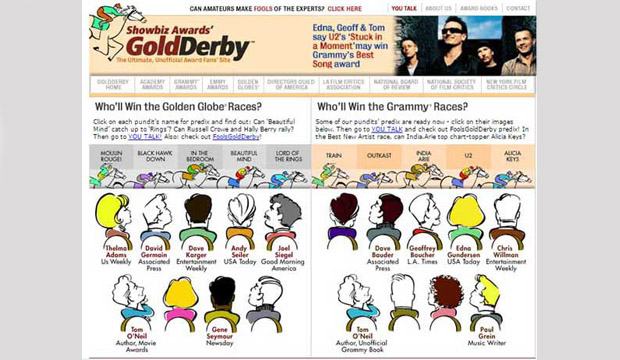 Gold Derby pools award predictions from leading experts at Variety, Deadline, USA Today, IMDb, Associated Press, Entertainment Weekly, Huffington Post, Rolling Stone, Vanity Fair, Indiewire, TV Guide, TV Line, Yahoo and other top media and invites users to make their own predictions to compete for best accuracy scores. Each group of predictions is aggregated into racetrack odds that are known for their high degree of accuracy and are monitored closely, even obsessively, by Hollywood leaders.

The site was launched in 2000 by Tom O’Neil, author of “Movie Awards,” “The Emmys” and “The Grammys” (Penguin Putnam). He’s often quoted in major media and appears on CNN, MSNBC, “Entertainment Tonight” and other TV outlets. He licensed the site to the Los Angeles Times from 2005 to 2011 when he became the newspaper’s awards expert, then reclaimed ownership in order to relaunch Gold Derby with advanced prediction technology. In 2015, he sold the site to Penske Media Corporation and continues as Editor-in-Chief and President of Gold Derby Media LLC.

PHOTO: Gold Derby in January, 2002, the year “A Beautiful Mind” swept the Oscars and U2 and Alicia Keys reigned at the Grammys. Site users could click on the Experts’ caricatures to read their latest predictions while the site issued racetrack odds that summed up their collective view.

The original illustrations and designs used for Gold Derby when it was launched in the early 2000s were created by the celebrated and critically acclaimed artist Ty Wilson, whose work can be viewed at TyWilson.com where quality prints and posters can be purchased.