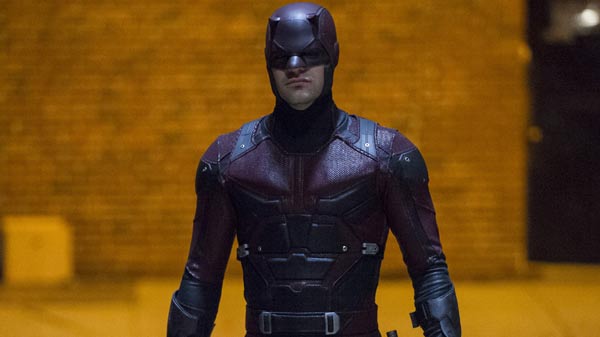 Superheroes don’t usually get much respect at award shows, but Netflix’s “Daredevil” – a new addition to the extended Marvel universe that also includes the “Avengers” films, “Ant-Man” and the ABC series “Agents of S.H.I.E.L.D.” – contends for three Emmys in Creative Arts categories: Best Main Title Design, Best Sound Editing and Best Supporting Visual Effects. How many of them will the freshman season win?

‘The Walking Dead’: Will it go four-for-four at Creative Arts Emmys?

Perhaps the show’s best bet is Sound Editing. That’s where another superhero series repeatedly prevailed; “Smallville,” chronicling the early years of Clark Kent before he became Superman, won that award three times (2002, 2006 and 2008).

“Daredevil” is being considered there for the episode “Speak of the Devil,” in which supervillain Wilson Fisk (Vincent D’Onofrio) gains the upper hand against the title hero (Charlie Cox), but it’s up against a slew of past Sound Editing winners: last year’s champ “Black Sails” (episode “XVIII”), two-time victor “Boardwalk Empire” (episode “The Good Listener”), and 2012 winner “Game of Thrones” (episode “Hardhome“). Rounding out the category are “The Walking Dead” (episode “Conquer”) and another comic book-inspired series, “Gotham” (episode “All Happy Families Are Alike”).

“Speak of the Devil” is also its Emmy entry for Best Supporting Visual Effects, a category created in 2013. Luckily for “Daredevil,” last year’s winner in that race, “Black Sails,” has moved this year to the main Best Visual Effects contest. But it still has to face “Boardwalk Empire” (episode “Golden Days for Boys and Girls”), which has won two Emmys for its effects, as well as “American Horror Story Freak Show” (episode “Edward Mordrake, Part 2”), “Gotham” (episode “Lovecraft”) and “The Walking Dead” (episode “Conquer”).

Animated title sequences are often popular, and the one for “Daredevil’ features a dripping, blood-red motif that might appeal to the TV academy. It faces “American Horror Story: Freak Show,” “Bosch,” “Halt and Catch Fire,” “Manhattan” and “Olive Kitteridge.”

Make your own Emmys picks now starting at the bottom of this post. You could win one of our three prizes ($500, $300 and $200 Amazon gift certificates) as well as a place of honor on our leaderboard and a starring role in next year’s Top 24 Users (the two dozen folks who do the best predicting this year’s Emmys line-up).

'House of the Dragon,' the 'Game of Thrones' prequel, finally gets a release date from…

'The Walking Dead' deaths in order: 33 most shocking so far, including Beta, Glenn, Abraham ...