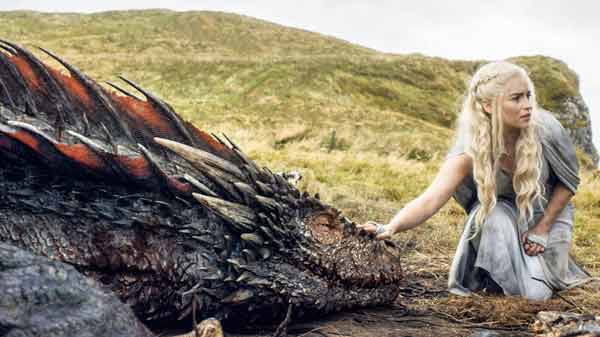 “Game of Thrones” won the Emmy for Best Drama Series and set a new record for the most wins for a series in a single year with 12. It had been nominated for Best Drama Series for the last five years in a row at the Emmys, and including its eight Creative Arts victories last Saturday, it has now won 26 times since it debuted in 2011.

“Thrones” received 24 total nominations this year, more than twice as many as “Mad Men,” which had 11 bids, but AMC’s period drama was nevertheless a very close second with 3/2 odds. Indeed, “Mad Men” was one of the only two previous winners in this category, having won four years in a row (2008-2011).

“House of Cards” was next with distant 50/1 odds. This was the third straight nomination for the Netflix political drama, which tied “Mad Men” with 11 nominations, including lead-acting bids for Kevin Spacey and Robin Wright. It won twice at Creative Arts: Best Score (Series) and Best Drama Guest Actor for Reg E. Cathey.

Also with 50/1 odds was “Orange is the New Black,” which had four total nominations this year. It picked up 10 noms and three wins last year when it competed as a comedy, but the switch to drama resulted in a significant shortfall for the sophomore prison series. However, at the primetime ceremony, it won Best Drama Supporting Actress (Uzo Aduba).

“Better Call Saul” was the third program that got 50/1 odds. The AMC freshman drama is a prequel to “Breaking Bad,” which won Best Drama Series the last two years in a row. It earned seven nominations in all, including Best Drama Writing and acting bids for Bob Odenkirk and Jonathan Banks.

“Downton Abbey” trailed with 100/1 odds. It was nominated for the fourth year in a row for Best Drama Series, and before that it won Best Movie/Miniseries in 2011. It received eight nominations this year, including noms for supporting actors Jim Carter and Joanne Froggatt. It prevailed just once at Creative Arts last weekend: Best Hairstyling (Single-Camera).

Robin Wright and Demian Bichir on making 'Land': 'We need each other to get through difficult times'…