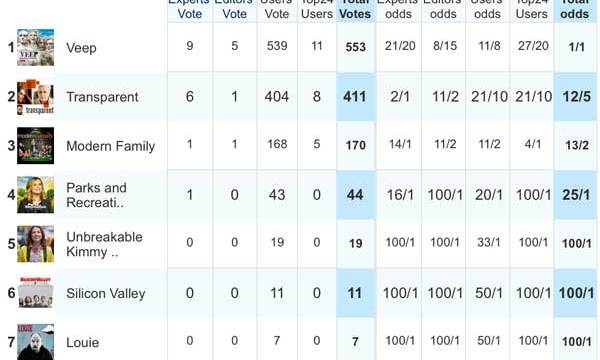 Emmy pundits knew “Modern Family” instantly lost its frontrunner status to win a record sixth Best Comedy Series trophy when nominations were announced because it had been snubbed for both Best Writing and Directing (it is ranked third in our odds). No comedy has won the top race without contending in at least one of these categories since “Friends” in 2002. Prior to that, you have to go back “My World and Welcome to It” in 1970 when there were only three slots each for Best Writing and Best Directing then, not five to six as there are now.

Perhaps even more significant statistically was that “Modern Family” was snubbed for the first time in Best Comedy Picture Editing. As at the Oscars — where no film between 1981 and 2014 won Best Picture without an editing nomination — recognition from the editors’ branch of the TV academy is instrumental to winning a top Emmy. Indeed, since the introduction of separate drama and comedy editing categories in 2002, all but one Best Comedy Series — “30 Rock” in 2007 — has been supported by such a bid.

What does that mean for the current Comedy Series frontrunner “Veep,” which has yet to be nominated at the Emmys for editing. It did win the equivalent category at the most recent American Cinema Editors awards and membership in this guild overlaps that of the editors’ branch. Its Emmy exclusion might be excusable as “Veep” entered a whopping four episodes for consideration; most other comedies submitted one or two.

“Transparent,” which currently sits in second place on our Comedy Series chart, also missed a statistically key below-the-line category: Best Half-Hour Sound Mixing. You have to go back to “Arrested Development” in 2004 to find the last Best Comedy Series winner without such a nomination. (“Will & Grace” in 2000 and “Sex and the City” in 2001 are the next two most recent examples).

And while “Silicon Valley” is nominated for writing, directing, sound mixing and twice for editing, it did not reap any acting bids. The most recent Comedy Series champ to be snubbed by the actors branch was “The Wonder Years” in 1988. Prior to that, it was “The Monkees” in 1967.

In addition, “Silicon Valley” was not nominated for Best Comedy Casting. “Modern Family,” “Transparent” and “Veep” number among those nominees. Since the TV academy separated drama and comedy casting in 2000, the only Best Comedy Series winners without casting nominations have been the second season of “The Office” in 2006 and the seventh and ninth seasons of “Everybody Loves Raymond” in 2003 and 2005. Those latter snubs could be due to the fact that it had been years since that cast had been put together.

The other three Best Comedy Series nominees were all snubbed in key categories as well:

“Parks and Recreation” (snubbed in writing, directing, casting and editing); and

Click on the chart above to get a closer look at the odds of the four groups making Emmy predictions at Gold Derby: Experts, Editors, Top 24 Users (those two dozen folks who did the best at predicting last year’s winners), and Users just like you. Last year, our Experts had an accuracy rate of 58.62% which tied them with both Gold Derby’s Editors and the Top 24 Users. Our Users scored 51.72% (Click on any of these groups to see what they got right and wrong last year.) Which group will be victorious this year?

Make your own Emmys picks now starting with Best Comedy Series to the right or at the bottom of this post.

You could win one of our three prizes ($500, $300 and $200 Amazon gift certificates) as well as a place of honor on our leaderboard and a starring role in next year’s Top 24 Users (the two dozen folks who do the best predicting this year’s Emmys line-up).

25 best married TV couples of all time, ranked, including 'The Office,' 'Modern Family,' 'This Is Us'…

Tituss Burgess ('Unbreakable Kimmy Schmidt') could surprise at the Emmys and finally win, and here's…

Gail Mancuso ('Modern Family' director): The series finale 'was like a reunion, but in reverse'…