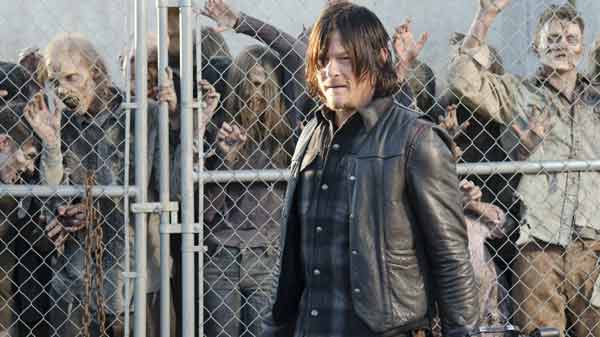 Though AMC’s horror series “The Walking Dead” has never been nominated for Best Drama Series at the Emmys, it has consistently contended in craft categories at the Creative Arts Awards, winning twice for Best Prosthetic Makeup (2011, 2012). This year the hit show achieved a new high with four nominations for its fifth season. How many do you think it will win? Let’s consider each category.

Best Prosthetic Makeup
It’s no surprise “The Walking Dead” has won this race twice; the series uses extensive makeup effects to create its horrifying zombie hordes. This year TV academy members judged the episode “Strangers,” the second episode from season five, which featured gooey water zombies and cannibals feasting on a man’s leg. Will the series prevail for the first time in three years?

Best Sound Editing (Series)
“The Walking Dead” has been nominated in this category four times in the last five years, only missing out in 2013. But it lost to “Boardwalk Empire” (2011), “Game of Thrones” (2012) and “Black Sails” (2014). Will it finally win? It contends for the season-five finale, titled “Conquer,” in which the characters faced an onslaught of enemies from terrifying walkers to gun-wielding Alexandria residents.

Best Supporting Visual Effects
As with Best Sound Editing, “The Walking Dead” has been nominated four times for its visual effects without winning. In 2011 and 2012 it was up for the combined Visual Effects award, losing out to “Boardwalk Empire” and the “Game of Thrones.” In 2014 it was nominated in the new Supporting Visual Effects category, but that award went to “Black Sails.” Coincidentally, those are the same three shows that beat “Walking Dead” for Sound Editing, and in the exact same years.

Best Stunt Coordination
Despite years of action-packed storytelling and three straight SAG Award nominations for Best Stunt Ensemble, this is the show’s first bid in this category at the Emmys, and it’s the first ever nomination for the show’s stunt coordinator Monty Simons.

Rival Emmy nominees in this year’s race are “Boardwalk Empire,” “Game of Thrones,” “Sons of Anarchy” and last year’s winner “The Blacklist.”

Make your own Emmys picks now starting at the bottom of this post. You could win one of our three prizes ($500, $300 and $200 Amazon gift certificates) as well as a place of honor on our leaderboard and a starring role in next year’s Top 24 Users (the two dozen folks who do the best predicting this year’s Emmys line-up).

'The Walking Dead' deaths in order: 33 most shocking so far, including Beta, Glenn, Abraham ...