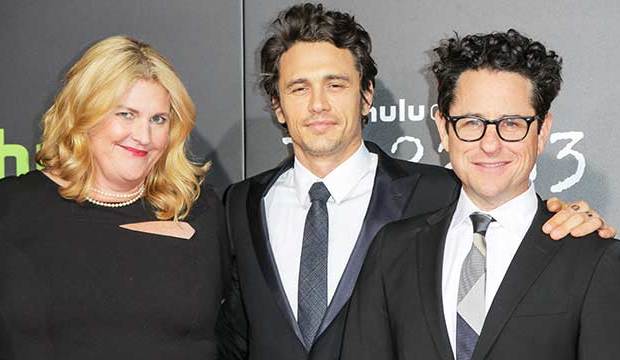 “Even though we’re done making it, I still pinch myself because he and I are now friends. If I could go back and tell my 13-year-old self that you are going to be friends with Stephen King and you’re reading his ‘Firestarter’ now, I would not believe it,” admits “11.22.63” executive producer Bridget Carpenter as we chat via webcam (watch below) about her TV version of his novel. “Working with him was a joy. He was so smart. He is so kind and generous. One of the things he gave me as a gift was he empowered me.”

The Hulu eight-hour limited series centers on a teacher (James Franco) who is shown a time portal by a restaurant owner (Chris Cooper). It allows him to travel back to 1960, where the goal is to stop the assassination of President John F. Kennedy in 1963. Other stars included Sarah Gadon, George MacKay, Cherry Jones, Nick Searcy, Josh Duhamel, T.R. Knight, and Daniel Webber.

The program was produced by J.J. Abrams (“Star Wars: The Force Awakens,” “Lost”) and his company Bad Robot. Of getting the job as showrunner, Carpenter says, “”I’m a lifelong Stephen King super fan, and I had read the book for fun. I knew everybody at Bad Robot but had never had the opportunity to work with them. I went in with not a big, clear plan but just love and enthusiasm and passion, because not only do I love Stephen King, but I love time travel stories.”

She adds that getting Franco to sign on was a top priority: “James was such a coup for us, not just because of his undeniable charisma and emotional intelligence. The truth is that he is a teacher in his life. The world knows him as a global movie star, Oscar-nominated, but he has an equal if not larger passion for teaching. He came to this character with a real sense of affiliation.”

Before working on this series, Carpenter had previously served as a writer and producer on “Friday Night Lights,” “Parenthood,” and “The Red Road.”