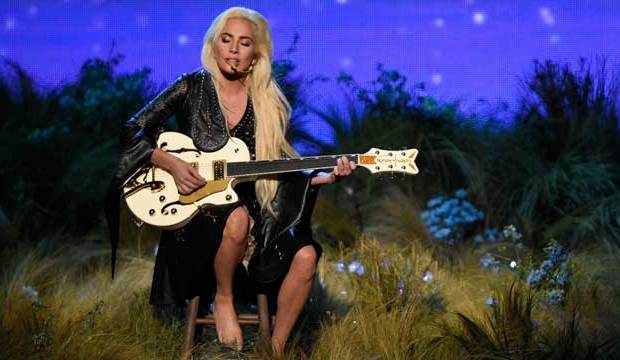 The 2016 American Music Awards were held on Sunday night, November 20. The ceremony aired live on ABC and was hosted by Gigi Hadid and Jay Pharoah. But while many prizes were handed out, the musical performances were really the main event. So who was the best of the night? Vote in our poll at the bottom of this post.

The ceremony opened with Bruno Mars performing his latest song “24K Magic,” from his new album of the same name. Ever the showman, Mars is always a tough act to follow, but he definitely had competition from the night’s other impressive acts.

There was Lady Gaga, who delivered a powerful, stripped-down rendition of “Million Reasons” from her current album “Joanne.” Often known her her elaborate productions, Gaga this time relied on simple staging and her powerful vocal performance.

Ariana Grande and Nicki Minaj delivered a literally stripped-down version of their collaboration “Side to Side,” singing alongside a troupe of scantily clad dancers. It sure paid off for Grande, who won Artist of the Year at the end of the night.

John Legend‘s smooth voice made his rendition of “Love Me Now” one of the most moving of the evening, and it didn’t hurt that he had some of the night’s best staging, performing against a backdrop of videos and images of loving couples from all walks of life.

A trio of younger singers also brought the emotion. Former One Direction member Niall Horan (“This Town”), teen breakout Shawn Mendes (“Treat You Better” and “Mercy”) and James Bay (“Let it Go”) all wore their hearts on their sleeves.

Then the veterans took the stage and showed the youngsters how it’s done. Green Day performed a thrilling version of their 2016 song “Bang Bang,” during which they threw in a pointed comment about our new President-Elect: “No Trump, no KKK, no fascist USA!” And Sting, who at the end of the night received the Award of Merit, proved he’s still at the top of his game at age 65 with a medley that included his new single “I Can’t Stop Thinking About You,” as well as classics “Message in a Bottle” and “Every Breath You Take.”

So who did you think was the best of the night? Vote in our poll below.