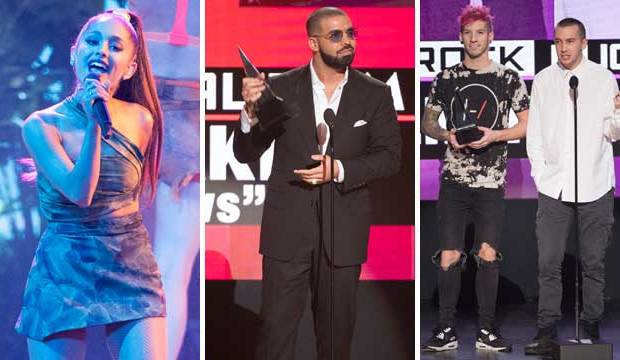 Ariana Grande pulled off a surprise victory for Artist of the Year at the 2016 American Music Awards — all the more surprising because it was her only nomination. Though perhaps we should have seen that coming: as it was her only AMA bid, it likely concentrated the support from her passionate fan base who voted online.

Twenty One Pilots also prevailed twice: Favorite Alternative Rock Artist as predicted by our racetrack odds, and they also took Favorite Pop/Rock Duo or Group, upsetting the frontrunners DNCE. In their acceptance speech for the Alternative award, they joked, “We may have won because Coldplay couldn’t make it tonight.”

Selena Gomez was up for just two awards, but she prevailed as Favorite Pop/Rock Female Artist over Adele and Rihanna and delivered a heartfelt acceptance speech in which she confessed to once feeling broken despite her success.

The Chainsmokers had four nominations and won Electronic Dance Music Artist, as expected. Meanwhile, Fifth Harmony and Ty Dolla Sign surprised us by winning Collaboration of the Year for “Work from Home,” overtaking Drake and Rihanna’s own “Work.”

Zayn was only nominated for New Artist of the Year, but he won that award over frontrunner Shawn Mendes. This may have been Zayn’s first AMA as a solo artist, but of course it’s not the first of his career. He won multiple prizes as a member of the boy band One Direction, including Artist of the Year (2014, 2015).

In the country field, Florida Georgia Line won Favorite Country Duo or Group for the third year in a row. They were also nominated for Favorite Country Song for “Holy,” but that prize went to Tim McGraw for “Humble and Kind” instead.

There were many other awards presented off-screen, and in those categories Justin Bieber cleaned up with four victories. In fact, he won all his nominations except Artist of the Year: Video of the Year (“Sorry”) as well as a sweep of the pop field as Favorite Male Artist, Album (“Purpose”) and Song (“Love Yourself”).

As for Beyonce, she one just one of her nominations, Tour of the Year, while fellow bestselling superstar Adele also won just once: Favorite Adult Contemporary Artist.

What did you think of the 2016 AMAs? Join the discussion in our forums and let us know.