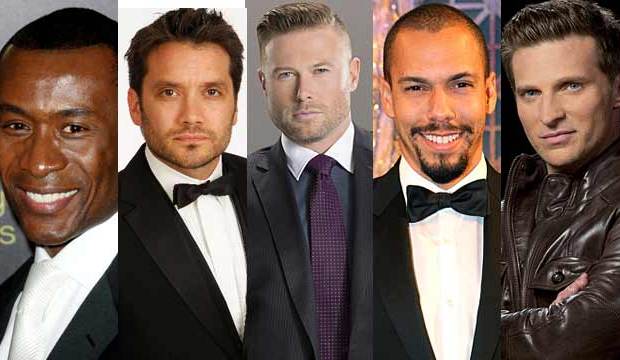 In the Daytime Emmy race for Best Supporting Actor, three of the five nominees have submitted effective, if imperfect, sample episodes to judges: Dominic Zamprogna (“General Hospital”), Jacob Young (“The Bold and the Beautiful”) and Bryton James (“The Young and the Restless”), while Sean Blakemore (“GH”) and Steve Burton (“Y&R”) may be on the outside looking in. But of those top three, it’s hard to say whose name will be called when the winners are revealed on May 1.

As it has done since 2013, the Television Academy has released the reels submitted to judges in the acting categories for viewers to watch and evaluate online. These performance reels were evaluated during the pre-nominations round, and the nominees and winners were decided by that vote.

Below: A recap of the submissions in the Best Supporting Actor race, including an analysis of each performance in relation to range, sympathy and impact – the key components of a winning entry. And make sure to read my analyses of the races for Best Actor, Best Actress and Best Supporting Actress.

Synopsis: In the first half of the reel, Shawn Butler (Blakemore) finally learns the truth from his ex that he is the father of her son. Later, after pleading guilty to attempted murder charges, Shawn says goodbye to his friends and family, including his son (Younger Actor nominee Tequan Richmond), who still doesn’t know the truth of his paternity.

Analysis: Butler’s reel has a few nice moments of emotion. He is angry at his ex, not just for her role in his incarceration, but also for lying about his son, whom Shawn never got a chance to be a father to. And in his scenes in the courtroom, Blakemore has a sweet, heartfelt moment with his son.

But despite the intensity of these storylines, Butler is too understated and stoic. There are no fireworks, no big moments that typically appeal to Emmy voters. And considering that other submissions in this category contain showier, more dynamic emotional performances, Blakemore has to be considered an underdog here.

Steve Burton, “The Young and the Restless”

Synopsis: Dylan McAvoy (Burton) has a heated argument with his girlfriend Avery (Supporting Actress nominee Jessica Collins) where they accuse each other of being in love with other people, leading them to break up. Later, Dylan comforts Avery after her rape, and promises to always be there for her.

Analysis: With six career nominations and one win in the Supporting Actor category for his role as Jason Morgan on “GH,” Burton is both an industry veteran and an Emmy favorite. He is sympathetic in his scenes with Jessica Collins and has a nice moment of impact as they split up and he wonders how they reached this breaking point in their relationship.

But Burton’s reel is the most underwhelming in this category. In fact, the majority of his submission shines a brighter spotlight on Collins, who could have easily submitted this as her own reel since she gets the bulk of emotional range and impact. Overshadowed by his own co-star, Burton stands little chance to win.

Bryton James, “The Young and the Restless”

Synopsis: Devon Hamilton (James) angrily accuses the police of not doing their jobs in prosecuting the man who abducted his wife. Later he lashes out after discovering that his father (Best Actor nominee Kristoff St. John) was the kidnapper.

Analysis: James was nominated five times in the Younger Actor category, winning once in 2007, but this is his first nomination in the Supporting Actor race. It’s not hard to see why he made the cut since he delivers a strong performance in terms of range and sympathy. We see Devon’s frustration and despair during his wife’s kidnapping, and his scenes with St. John nicely balance anger, sadness and confusion. We sympathize with Devon as he struggles to understand his father’s betrayal.

James could be disadvantaged by the fact that St. John dominates so much of the reel and gives an equally strong performance. But voters might also want to reward James for holding his own against his formidable co-star.

Jacob Young, “The Bold and the Beautiful”

Synopsis: In the first half of the reel, Rick Forrester (Young) confronts his wife and brother at gunpoint after finding them in each other’s arms. In the second half, Rick’s fiancee (Karla Mosley) confesses that she is transgender, but despite his shock he promises to stand by her.

Analysis: Young was a 2002 winner for Younger Actor for his work on “GH,” and this is his sixth career nomination. His reel has plenty of range: from the anger of a jilted husband to the sensitivity on his scenes with his fiancee. It is this second half of the reel that carries the most sympathy and impact, as Rick deals with the shock of his fiancee’s confession and then admits that he has never felt that any woman before her loved him for himself instead of just his money.

Young could also benefit from the social significance of the storyline, as transgender rights have been prominent of late in the news and entertainment media. And in addition to Young’s bid “B&B” earned nominations for Drama Series, Writing Team, Younger Actress (Reign Edwards), and Guest Performer twice (Obba Babatunde and Anna Maria Horsford) on the strength of this storyline alone, so Young could be swept up by the show’s momentum.

But there are two factors that could hurt Young. First, though his two scenes provide a nice emotional contrast, they feel disconnected from each other, and the abrupt switch of storylines could be confusing for voters. Second, the majority of his reel is understated, And most of the emotional fireworks come from his co-star Mosley.

Synopsis: Dante Falconeri (Zamprogna) tears into his wife Lulu (Emme Rylan), accusing her of having been unfaithful. In the second half of the reel, Dante confesses to Lulu that he himself cheated, and he attempts to justify his actions.

Analysis: Because of the subject matter of these scenes, Zamprogna gets to demonstrate a lot of range and impact. First, he displays explosive hurt and anger when he believes his wife has strayed. Then he expresses shame and desperation as he begs for her forgiveness after being caught in his own infidelity.

One potential obstacle for Zamprogna is that much of his reel is commanded by his scene partner Rylan, who is just as impressive and dynamic, especially in the second half of the submission. And since Rylan turns out to be truly the wronged party, she earns that majority of the viewer’s sympathy. Will voters hold the character’s seeming hypocrisy against the actor?

Conclusion: James, Young, and Zamprogna have the strongest reels, though no one submitted the kind of slam-dunk submission that would indicate a clear-cut frontrunner. But my money is on Young, who stands to benefit from the storyline that has earned his show so many nominations and is far more groundbreaking than the relationships featured in his competitors’ submissions. But I won’t be surprised if either James or Zamprogna win on the basis of their bigger, more dynamic performances.