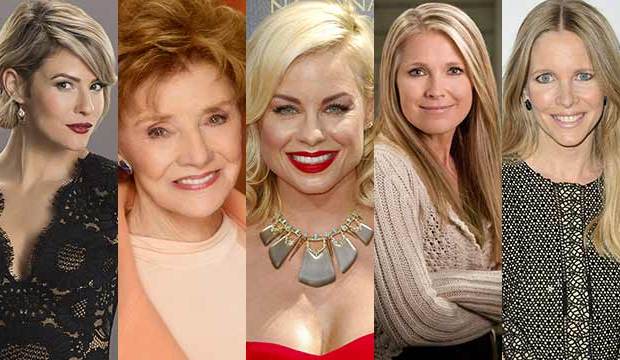 Two long-time “Days of Our Lives” supporting actresses — Peggy McCay and Melissa Reeves — each has a great chance of winning their first Daytime Emmy this year based on the episodes they submitted to judges. However, not only will each of them have to beat the other but both better watch out for Jessica Collins. She could prevail almost a year after ending her four-year on “The Young and the Restless.” Also in the running are “Y&R” stalwart Lauralee Bell and Linsey Godfrey (“The Bold and the Beautiful”).

As it has done since 2013, the Television Academy has released the reels submitted to judges in the acting categories for viewers to watch and evaluate online. These performance reels were evaluated during the pre-nominations round, and the nominees and winners were decided by that vote.

Below, a recap of the submissions in the Best Supporting Actress race, including an analysis of each performance in relation to range, sympathy and impact – the key components of a winning entry. And make sure to read my analyses of the races for Best Actor and Best Actress.

Lauralee Bell, “The Young and the Restless”

Synopsis: Christine Blair (Bell) wakes up in a hospital after a car accident and discovers that she has lost her unborn child. Later she is confronted by her husband Paul (Emmy-winner Doug Davidson) because she refuses to take the time to grieve for their loss.

Analysis: Bell submits a very sympathetic reel as a mother dealing with the loss of a child. We feel her sadness as well as her anger and loss as she retreats into her work rather than face what she is feeling. When Christine throws herself into her work, we feel for her as she looks for someone to blame.

But Bell has limited impact because the majority of her scenes are dominated by her co-star Davidson, who delivers a strong, dynamic performance. At times Bell seems to be secondary to Davidson and not always the primary focus of the submission.

Jessica Collins, “The Young and the Restless”

Synopsis: Avery Clark (Collins) confronts her abusive ex-boyfriend and eventually throws him out of her apartment. In the second half of the reel, Avery is in shock after being raped and rejects the help of her sister (Emmy-winner Gina Tognoni).

Analysis: This is Collins’s second nomination, following a bid in this category in 2013, and her submission is full of range, sympathy and impact. In both parts of her reel, we feel for Avery as she struggles to break free from an abusive boyfriend. Collins shows strength in her scenes where she stands up to her boyfriend, and the contrast of her vulnerability in the hospital after being raped gives the entire reel a lot of impact and range as Avery struggles to maintain her strength despite her vulnerability.

But though her episodes aired relatively close together, there is a disjointed feel to the submission, and the storyline lacks context. But Collins is so good in these scenes that voters may overlook the lack of continuity.

Linsey Godfrey, “The Bold and the Beautiful”

Synopsis: Caroline Forrester (Godfrey) confesses to her husband Ridge (past Emmy-nominee Thorsten Kaye) that she has been sleeping with, and is pregnant by, his son Thomas (Younger Actor nominee Pierson Fode).

Analysis: This is Godfrey’s third Emmy nomination in a row (she was up for this award last year and Younger Actress in 2014), and she conveys an impressive amount of shame and despair in her performance. She also has a strong moment of impact at the end of the reel when she reveals that she is pregnant with the child of her husband’s son.

But despite that moment of impact, Godfrey’s reel lacks emotional range as she spends much of the submission crying and apologizing for her deception and begging for forgiveness. We also don’t feel much sympathy for Caroline given her transgression, and without more range or sympathy, Godfrey may be an underdog in this category.

Peggy McCay, “Days of Our Lives”

Synopsis: Caroline Brady (McCay) sees a vision of her late husband, and fears that her Alzheimer’s Disease is worsening. Later she attempts to convince those around her that she has received a phone call from her long lost son.

Analysis: Counting both daytime and primetime awards, this is McCay’s eighth Emmy nomination, and she won once as Best Drama Guest Actress in primetime for “The Trials of Rosie O’Neill.” The first minutes of her submission are particularly impactful as she reveals that she is afraid, not only of her deteriorating health, but of telling her family about her condition.

But the second half of the reel is comparatively anticlimactic, with McCay having no moments of real impact. And competing against much more dynamic submissions, McCay might be too understated to bring her her first Daytime Emmy.

Melissa Reeves, “Days of Our Lives”

Synopsis: Jennifer Horton (Reeves) discovers her son in bed with her nemesis Eve (Best Actress-nominee Kassie DePaiva). After raging at Eve, she attacks her son for his actions.

Analysis: Reeves has been playing Jennifer Horton off and on for over 30 years, but this is only her second nomination. Her performance is classic soap opera, full of emotional fireworks as she conveys not just anger, but shock and disappointment. And she has some great moments of impact when she calls out Eve for her betrayal, and her hurt at her son’s choices. Some voters may find her performance lacking in range, and the reel ends abruptly and awkwardly, without a lot of impact. But of all the performances in this category, this is the one that has stuck with me.

Conclusion: Of all of the nominees, Jessica Collins has submitted the episode with the most range, sympathy and impact, but Melissa Reeves’s submission is full of the kind of anger and emotion that could attract a lot of votes. Either one could win, but Peggy McCay has a real chance to pull off an upset. She is a respected veteran whose reel contains a great deal of sympathy. In either case, one of these women will likely earn her first Daytime Emmy when the trophies are handed out on May 1.