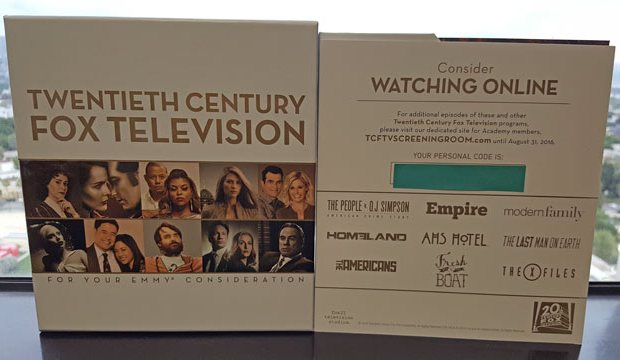 20th Century Fox aired some of the most buzzed-about shows of the TV season and the studio is making sure Emmy Awards voters don’t forget it, putting “The People v. O.J. Simpson” front and center in its Emmy FYC mailer that just went out to TV academy members. Take a peek inside the campaign box by scrolling through our photo gallery above.

Nine series sent selected episodes on DVD screeners in individual booklets, including the much hailed “Marcia, Marcia, Marcia” episode from “The People v. O.J. Simpson” that many think could push Sarah Paulson to an Emmy win for Best Movie/Mini Actress after four previous losses.

Fox also included a private code for their screening room website where voters can watch each of their shows’ Emmy-eligible seasons for free. Do you think “O.J.” will be embraced by Emmy voters? Make your predictions now to be eligible to win our contest prizes ($500 for first place, $300 for second, $200 for third) and then sound off at the bottom of this post or right here in our famous TV forums.