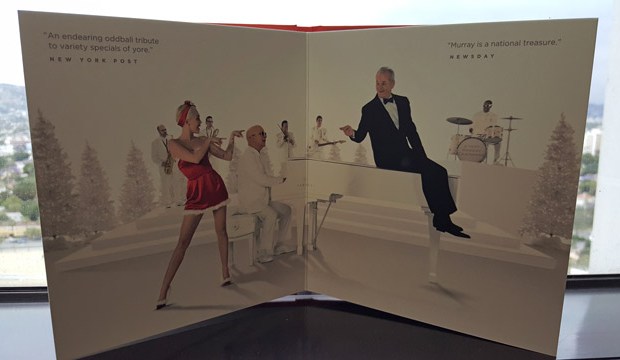 Streaming giant Netflix has begun its Emmy Awards push by sending out an FYC booklet of Bill Murray‘s “A Very Murray Christmas” to voters. The package includes a DVD of the TV movie as well as a streaming code for it and all other Netflix offerings (like “House of Cards,” “Orange is the New Black,” “Grace and Frankie” and “Unbreakable Kimmy Schmidt”). Directed by Oscar winner Sofia Coppola, “A Very Murray Christmas” is a throwback variety show with Murray leading an all-star cast that includes George Clooney, Miley Cyrus, Rashida Jones, Amy Poehler, Chris Rock and Paul Shaffer, who all do a bit of singing or get into some mischief with him.

In the special, Murray harrumphs because a storm has caused all of his celeb guests to cancel on his live Christmas special. But Poehler convinces him to go on with the show because he’ll face a financial crisis if he cancels. Murray, who won the Emmy for Best Movie/Mini Supporting Actor last year for HBO’s “Olive Kitteridge,” is looking to make his move into the Best Movie/Mini Actor race this year for the Netflix production.