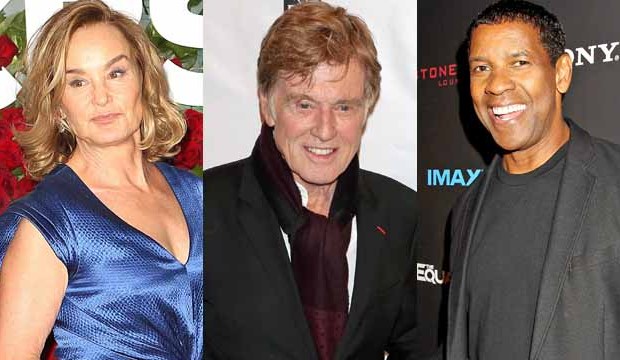 Who should the American Film Institute select as its 45th life achievement award recipient? Last year’s announcement of film composer John Williams as the honoree came on October 8, so the decision is probably in the works right now. After reviewing the possible choices, be sure to vote in our poll below as to who you think would be the best selection. Then discuss this topic in our notorious forums by clicking here.

Other than Spielberg and Hanks, who were 49 and 46 respectively when they were honored, everybody else has been at least in their mid 50s. For our poll, we set the minimum age as 55. Our list of women includes Oscar-winning actresses Julie Andrews, Sally Field, Diane Keaton, Jessica Lange, and Helen Mirren plus Oscar nominee Glenn Close. Our list of men consists of Oscar-winning actors Jeff Bridges, Michael Caine, George Clooney, Robert Duvall, and Denzel Washington, Oscar-winning directors Joel and Ethan Coen, Francis Ford Coppola, Ron Howard, and Robert Redford, plus Oscar nominee Eddie Murphy.

Don’t look for Woody Allen, Gene Hackman, and Maggie Smith in the poll. It is very unlikely they would agree to attend the ceremony, and that’s one of the major requirements. An entire evening is devoted to the person as a key fundraiser for the AFI.