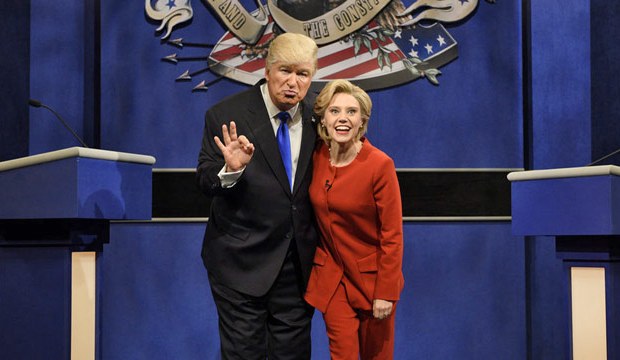 For more than a decade, “Saturday Night Live” star Darrell Hammond impersonated Donald Trump on NBC’s late-night sketch comedy. But this season, executive producer Lorne Michaels made a big move by saying “you’re fired” to Hammond (though he’s still the show’s announcer and portrays Bill Clinton) and hiring outspoken liberal Alec Baldwin to play the Republican candidate. So, how did Baldwin do in his first Trump sketch? Vote in our poll below.

In the October 1 season premiere episode, Margot Robbie hosted with musical guest The Weeknd. However, we’re betting the only thing people will be talking about tomorrow is the opening debate sketch between Trump and Hillary Clinton, played once again with grinning aplomb by Kate McKinnon.

Like Clinton’s rise in the polls, McKinnon also has reason to be smiling ear-to-ear. After losing back-to-back Emmy Awards to Allison Janney (“Mom”) as Best Comedy Supporting Actress in 2014 and 2015, McKinnon finally prevailed this year thanks in part to her now-iconic impression of Clinton.

This could also be good news for Baldwin at the Emmys. He’s a two-time winner of Best Comedy Actor for “30 Rock” (2008-2009), and he has accumulated 16 nominations in all as a performer and producer. Now he could be the latest to be recognized for satirizing a real-life politico on “SNL.” Previously, Tina Fey won Best Comedy Guest Actress for portraying former vice presidential candidate Sarah Palin in 2009, and Larry David was just nominated for Best Comedy Guest Actor in 2016, largely on the strength of his performance as liberal senator Bernie Sanders.

How’d Baldwin do as Trump? After voting in our poll below, be sure to click here to discuss all things TV in our forums.