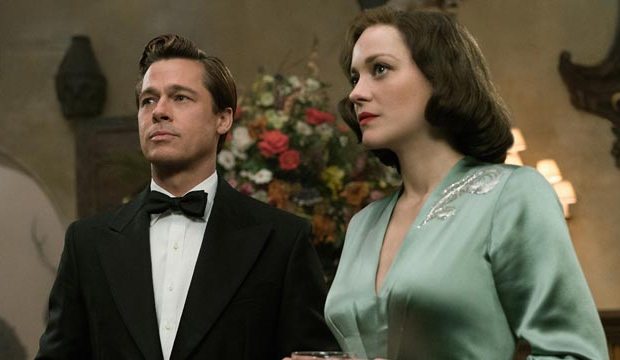 “Allied” opened on Wednesday, November 23, bringing together Oscar winning director Robert Zemeckis with Oscar winning stars Brad Pitt and Marion Cotillard in what is typically an Oscar friendly setting: World War II.  And when discussing the film, critics have come to a common conclusion that it is a decidedly “old-school” style of filmmaking.

In “Allied,” Pitt and Cotillard are assassins who meet while trying to kill a German official and then fall in love, but could she secretly be a German spy? This war-torn romance has earned Zemeckis comparisons to Steven Spielberg and James Cameron as an “old-time classicist.” It’s the kind of sweeping epic “that Hollywood has all but given up on in recent years.” And this Oscar-winning helmer (“Forrest Gump,” 1994) “is more than capable of making every aspect of it work on screen.”

Dish ‘Allied’ with Hollywood insiders in our notorious forums

Check out some of the reviews below, and join the discussion in our forums.

Rex Reed (New York Observer): “Beautiful, bold and blazing with sex and suspense, Allied is a gorgeously photographed, intensely romantic, action-packed film by the great director Robert Zemeckis with two titanic star performances by Brad Pitt and Marion Cotillard that delivers something for everyone. If you love classic movies and their potential to sweep you up into a world outside of your own experience, this one will rock your world.”

Justin Chang (Los Angeles Times): “A digital pioneer with the soul of an old-time classicist, Zemeckis hails from a long line of entertainers, including Steven Spielberg and James Cameron, who have broadened the medium’s horizons in order to reaffirm its most traditional pleasures.”

Edward Douglas (New York Daily News): “Depending on what you believe, ‘Allied’ is either a Robert Zemeckis-directed period spy thriller or ‘the movie that broke up Brad Pitt’s marriage’ … Either way, this is a solid script from Steven Knight (‘Eastern Promises’). And Zemeckis is more than capable of making every aspect of it work on screen with an old-school brand of filmmaking.”

Chris Nashawaty (Entertainment Weekly): “There’s something decidedly old-fashioned about the new Brad Pitt-Marion Cotillard spy thriller, ‘Allied.’ And that ends up being a good thing. It’s the sort of twisty, romantic, smart-but-not-too-smart espionage film that Hollywood has all but given up on in recent years.”

What was Dr. Fauci's reaction to Brad Pitt playing him on 'Saturday Night Live'?