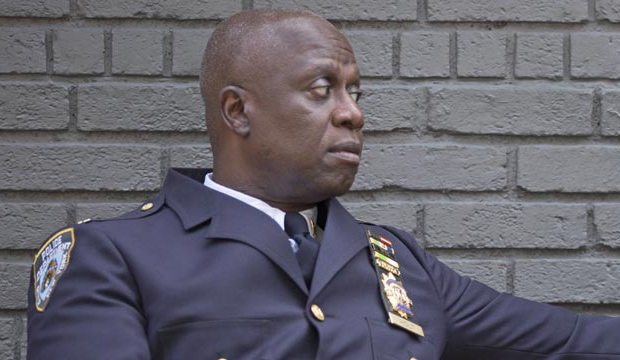 Andre Braugher earned his third consecutive Emmy nomination for Best Comedy Supporting Actor for his performance as Captain Ray Holt on Fox’s “Brooklyn Nine-Nine.” This two-time champ (Best Drama Actor for “Homicide: Life on the Street” in 1998; Best Movie/Mini Actor for “Thief” in 2006) is looking to win Emmy #3 on his 10th overall career bid with his episode submission “The Oolong Slayer.”

SYNOPSIS
At the end of the second season, Captain Ray Holt had been moved to Public Relations by his nemesis Kyra Sedgewick and is miserable. Jake Peralta (Andy Samberg), frustrated about not being allowed to investigate cases by the new captain, “The Vulture” (Dean Winters), convinces a bored Holt to secretly work a serial killer case. A misstep occurs with the two breaking down the wrong door, and ends with a suspension.

Peralta figures out who the actual killer is and urges Holt to help bring him to justice, but he refuses. When Peralta is held at gunpoint by the killer, Holt comes to his rescue and is rewarded by being reinstated as captain of the Nine-Nine.

Will Braugher pull off the win? Let’s take a look at the pros and cons:

PROS
The Emmys have moved away from small panels viewing each episode submission toward a popular vote. No longer do voters have to rank each nominee; rathey, they select only the one they want to win. That shift could favor this well-respected actor.

Reigning two-time champ Tony Hale is the favorite to repeat for his performance on “Veep,” but this is the first year he competes with a co-star (Matt Walsh). They could cancel each other out.

CONS
Joining Braugher, Hale, and Walsh in this race are past two-time winner Ty Burrell (“Modern Family”), returning nominees Tituss Burgess (“Unbreakable Kimmy Schmidt”) and Keegan-Michael Key (“Key and Peele”) and category newcomer Louie Anderson (“Baskets”).  With “Key and Peele” competing in Variety Sketch Series that leaves Braugher and Anderson as the only contenders for series that are not nominated.

Is Braugher really the Critics’ Choice? After moving these kudos to align with the movie awards,  the eligibility period was only the last six months of 2015. Key was nominated against Braugher, but that was for “Playing House.”