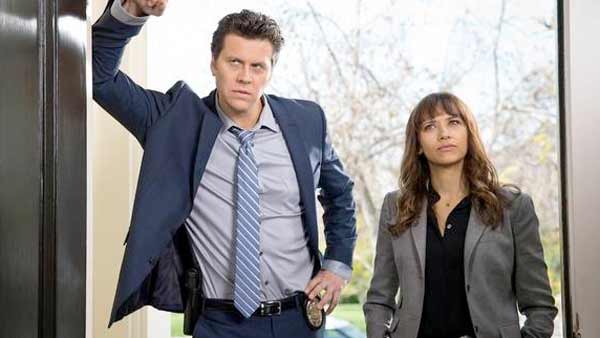 “Angie Tribeca” cast members Rashida Jones, Hayes MacArthur, Andree Vermeulen and Jere Burns and executive producer Ira Ungerleider joined moderator Dominic Patten (Deadline) last month at the Paley Center in Beverly Hills to chat about their favorite moments from the first season of the hilarious TBS comedy that spoofs police procedurals. Listen to the audio podcast below. Fans and media in attendance were also treated to a screening of the Season 2 premiere (airing on June 6, just one week before Emmy voting begins).

“I was lucky enough to be asked to play this part. [Creators] Steve and Nancy Carell emailed me, and it didn’t go to my junk mail — thank God!” Jones exclaims when asked how she came to play the title character, a detective in the LAPD’s Really Heinous Crimes Unit (RHCU). “They said, we wrote this script, it’s really stupid, we hope you like it. And I did. It was kind of love at first sight. I read it and I’m like, I have to do this.”

TBS made waves back on January 17 by airing the first season of 10 half-hour episodes continuously on a loop for 25 hours. What did Ungerleider think of this unique strategy? “I was scared s***less that they were putting it all out there. I felt like we were being stripped naked on a day and they were gonna see everything.”

“I think it was really smart,” adds Burns, who plays Lt. Chet Atkins. “Had you put out one of them, like the first one, a lot of people might have not quite gotten it. They were able to see because there were 10 more or five more, oh, this is the sensibility, I’ve gotta really pay attention because there are so many jokes per minute.”

“I haven’t seen that many jokes per second on TV since the Conan O’Brien era of ‘The Simpsons,'” champions Vermeulen, who portrays the robotic coroner Monica Scholls. “You’re welcome, comedy fans! I love Conan. Conan paid me to say that.”

As for his favorite joke from the first season, MacArthur (Det. Jay Geils) is fond of the moment from the pilot episode after he and Jones fight in the boxing ring. “And we go to the locker room and I have this prosthetic makeup on because my entire face is swollen. It was like four hours of makeup for a five-second joke. It was the first thing that I had shot and I’m like, oh, this is how we’re doing it.”