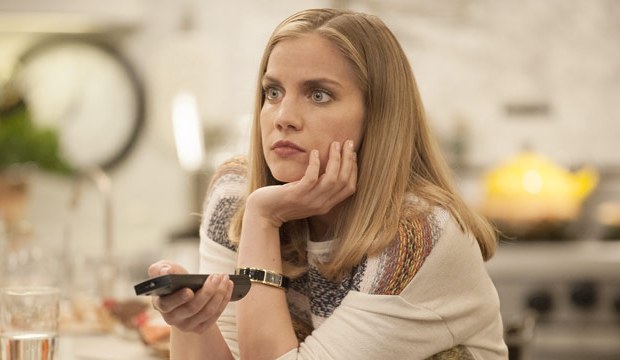 Anna Chlumsky, the former child star best known for her role in the now-classic “My Girl,” reaped her fourth consecutive Emmy nomination for Best Comedy Supporting Actress for her role as Amy Brookheimer on “Veep.” Chlumsky looks to win Emmy #1 with her episode submission “C**tgate,” but is it good enough to take down the competition?

SYNOPSIS
When President Selina Meyer (Julia Louis-Dreyfus) reads that a staff member has called her a “c**t,” she charges Amy, her former chief of staff and campaign manager, to investigate and find out who said it. As Chlumsky is harassed by Sidney Purcell (Peter Grosz), she continues the investigation by interviewing different staff members.

At the end of the episode, she and the rest of the ensemble confess that each of them has called President Meyer the “C” word. Will Chlumsky enter the winner’s circle with this episode? Let’s examine the pros and cons:

PROS
The reigning Best Comedy Series champ earned a series-best five acting nominations this year: four-time winner Louis-Dreyfus in lead, two-time winner Tony Hale, Matt Walsh and Chlumsky in supporting, and Martin Mull in guest. If the show sweeps with the acting branch then Chlumsky could easily go along for the ride.

Mayim Bialik (“The Big Bang Theory”) and Chlumsky could easily compete for the title of most well-adjusted former child star. With perennial nominee Bialik sitting on the sidelines this year, the child-star vote will not split this year.

Is she overdue? Chlumsky earned her first nomination for the second season of “Veep” with Hale. But while he’s won two, she hasn’t been able to pull out a victory.

CONS
“Veep” scored two writing nominations: “Morning After” and “Mother.” And those two episodes join “Kissing Your Sister” in the directing category. It could be a misstep for Chlumsky not to submit an episode nominated in one of those key categories.

Two-time reigning champ Allison Janney has a stronghold on this category and is the overwhelming favorite to win her third consecutive Emmy for “Mom.”

Chlumsky may be upstaged by funnier, bigger performances in this episode. Timothy Simons‘ character Jonah Ryan begins his race for Congress while Selina’s daughter Catherine (Sara Sutherland) comes out.