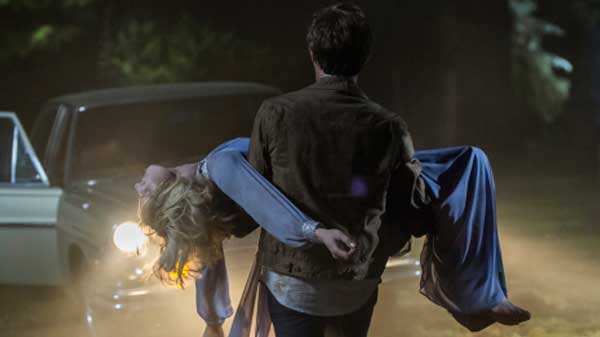 If you haven’t seen the season four finale of “Bates Motel,” STOP READING RIGHT HERE and come back later but for the rest of you….

As fans of Alfred Hitchcock‘s “Psycho” know Norman Bates kills his mother, digs her up out of her grave and keeps her in his house as if she was still alive. ‘Bates Motel’ has stayed pretty close to the original story. As this A&E drama series meticulously did not alter the characters or narrative too much, it was a foregone conclusion that this version’s Norman (the brilliant and expressive Freddie Highmore) would eventually kill off his own mother.

But who’d have thought he’d do it now at the end of season four?!

The show had been planned to have five seasons, so it only seemed natural that Norma’s death would come close to the final moments of the series. Especially since Norma is played by the show’s marquee attraction Oscar and Emmy nominee Vera Farmiga. TV shows rarely kill off their lead character so when Norman released carbon monoxide into his house on last week’s episode, “Forever,” and Sheriff Romero began performing a desperate CPR attempt it just seemed like she’d eventually wake once paramedics arrived in this week’s installment, “Norman.”

Written by Kerry Ehrin, the finale was structured so beautifully that we kept expecting Norma to be found in some other hospital room on life support. Even when Romero insisted on seeing the body in the morgue drawer or Norman visited the body in a funeral home it still seemed like at any minute the body would turn out to be someone other than Norma’s.

After all, “Bates Motel” has played with dream sequences and fantasy episodes before so it didn’t seem inconceivable that Norma would wake up safe in her bed with no poison ever being released into her house. Howver, about three-quarter of the way in, it started to feel like Norma really has to be gone. And as much as I didn’t want Norma to die, it has reached a point where I’d be mad if this turns out to be a trick.

Few shows have dared to kill off one of their main characters. “Homeland” did it to Brody and “All in the Family” with Edith Bunker. Doing so on “Bates Motel” will add a fascinating new dimension in story telling next season. Ehrin has confirmed that Farmiga will return next season as Norma is to embody aspects of Norman’s mental illness. We have long trumpeted her brilliance in the role and one can only expect more macabre magnificence once the actress is released from the bounds of playing a real human character and evolves into a psychotic delusion of her son.

Emmy voters searching for alternatives to the same old same old that often leads to repetitive bids should take a long at this finely crafted final episode. The script was flawlessly paced and kept even the most loyal fan guessing about what was to come and not quite sure if they wanted to believe them. While Farmiga was unconscious through most of the episode, her extremely able costars carried the show in her absence.

Highmore walks the same fine line that Hitchcock got from Antony Perkins in the original: a vicious killer for whom we feel sympathy. Highmore is so real, flawed and vulnerable that he almost makes you understand  his twisted way of thinking. Also Emmy-worthy is Nestor Carbonell as the grieving widower lashing out violently and vowing to prove that Norman is a murderer. And the costume designer deserves a nod for finding a beautiful periwinkle blue dress for Norma to be buried in that is just like the one the Sheriff’s wife in the original film so proudly claims she helped pick. Both Norma Bates and Hitchcock can rest easy knowing that their legacy is being careful cared for by the folks at the “Bates Motel.”