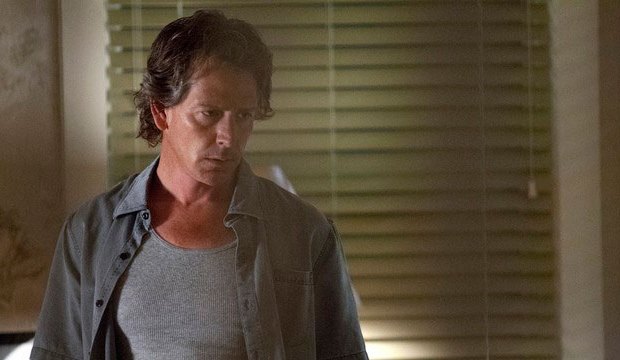 Can Drama Supporting Actor nominee Ben Mendelsohn win his first Emmy for the “Bloodline” season two finale “Part 23?” The actor snagged his second consecutive nomination in this category for playing Danny Rayburn, the perennial black sheep of a prominent Florida keys family who died at the hands of his younger brother, John (Kyle Chandler), at the end of season one. He returns as a ghost haunting his brother and in flashbacks that give insight into his past life and his struggles to connect with an estranged son, Nolan (Owen Teague). Will this emotional backstory prove the trick for voters?

SYNOPSIS
Throughout this sophomore season, we learn about Danny’s relationship with his son, and about his now deceased father, Robert’s (Sam Shepard), agreement to send money to the boy’s mother (Andrea Riseborough) to keep them both out of the Rayburn’s lives. In the finale, we flashback to the moment Danny introduced Nolan to his wealthy grandfather. While alone, Danny, a gifted chef, asks his father for financial help with his struggling restaurant. Robert agrees, but only he is allowed to stop sending monthly payments to Nolan’s mother. After sacrificing his business for his son, Danny bids him farewell before boarding a bus out of town.

Can Mendelsohn win for this episode? Let’s check the pros and cons:

PROS
As they alway say, it’s not the size of the role that counts: it’s what you do with it. Despite his limited screen-time this season, Mendelsohn nevertheless made an impression with an emotional backstory that added depth to his ne’er-do-well character. Voters were no doubt impressed by the actor’s ability to do so much with so little.

Vote-splitting from “Game of Thrones” nominees Peter Dinklage and Kit Harrington could benefit the competition, which also includes returning contenders Jonathan Banks (“Better Call Saul”), Michael Kelly (“House of Cards”), and Jon Voight (“Ray Donovan”). With all eyes on the battling “G.O.T.” stars, a surprise may be awaiting us on Emmy night, and it may be Mendelsohn.

Incidentally, this episode is also Chandler’s submission for his Drama Actor nomination. Perhaps voters impressed by his work will be partial to Mendelsohn’s as well.

CONS
Even in this episode, Mendelsohn’s screen time is limited, especially in comparison to last season. He could lose out to supporting players who have more to do in their respective submissions.

As was the case last year, Mendelsohn and Chandler are the only nominees from “Bloodline.” Does this hint at a lack of support from the TV academy overall?