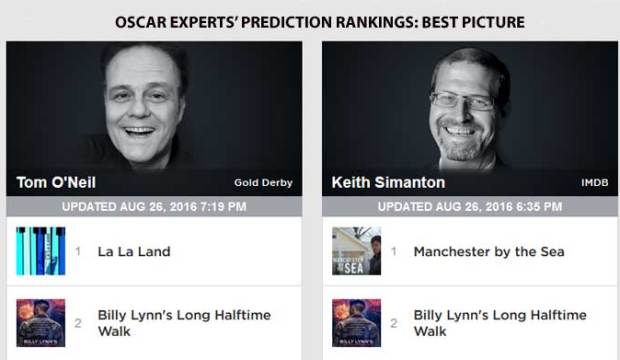 If there are only five Best Picture nominees at the 2017 Oscars on the sliding scale from five to 10, Gold Derby’s experts derived from major media outlets say those films will be “Manchester by the Sea,” “La La Land,” “Billy Lynn’s Long Halftime Walk,” “Loving” and now “Fences.” Just two days ago “The Birth of a Nation” sat comfortably in that fifth slot, but as even more Oscar experts have joined in making their early predictions (18 now instead of 16 on Monday), “Fences” now earns higher support overall. Click here to see how our experts rank contenders according to likelihood of winning in all top races. Use the drop-down menus at the top of each page to see other categories.

Perhaps “The Birth of a Nation” is dropping down in our experts’ rankings for Best Picture thanks to recent press for the film’s director/actor Nate Parker regarding his 1999 rape charges. Parker was acquitted of the crime, but controversy continues to dog the film. This biopic about Nat Turner, a slave and preacher who led a rebellion in 1831 Virginia, won both the Audience Award and Grand Jury Prize at the Sundance film festival. That was where Fox Searchlight, an Oscar powerhouse, picked up distribution rights for a whopping $17.5 million.

“Fences” adapts the 1983 Broadway play about a former African-American baseball player who now struggles to provide for his family. Denzel Washington stars and directs the film, with Viola Davis playing his wife — the same role for which she won the 2010 Tony for Best Play Actress. Washington already has a pair of Oscars for “Glory” (supporting, 1989) and “Training Day” (lead, 2001) and he’s now in second place with 4/1 odds to win his third, behind only Best Actor frontrunner Affleck with 5/2 odds. Davis (13/5 odds) is predicted to win her first Oscar after two prior losses, however Ruth Negga (“Loving”) is nipping at her heels for Best Actress at 10/3 odds.

As for the featured races, our experts forecast wins for “Manchester by the Sea” performers Williams (13/8 odds) for Best Supporting Actress and Hedges (5/1 odds) for Best Supporting Actor. Williams is a three-time nominee for “Brokeback Mountain” (supporting, 2005), “Blue Valentine” (lead, 2010) and “My Week with Marilyn” (lead, 2011), while 20-year-old Hedges would be enjoying his first Oscar nomination.

“Manchester by the Sea” director Lonergan is now tied with Ang Lee (“Billy Lynn’s Long Halftime Walk”) to win Best Director, as both come in at 10/3 odds. While this would be Lonergan’s first Oscar for the family drama about a man who returns home after his brother’s death, Lee is hoping to win #3 for his new visual war drama after previous victories for “Brokeback Mountain” (2005) and “Life of Pi” (2012).

See each Oscar expert’s individual rankings right here. Here’s how the Best Picture predictions break down according to our pundits’ odds, and which experts are backing them: