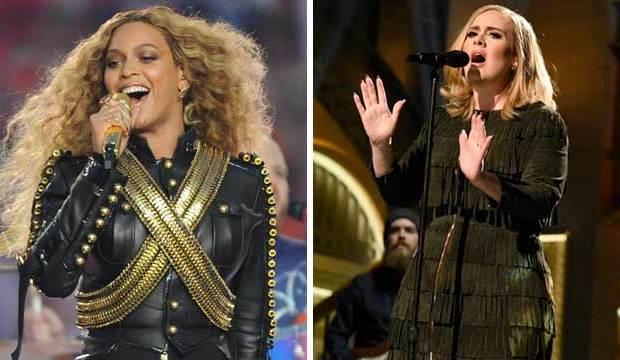 Courtesy of MediaPunch/REX/Shutterstock and NBC

It may be game over for the 2017 Grammys. There are still four months left in the eligibility period, which ends on September 30, but it’s already all about Adele and Beyonce according to Chris Willman, one of our foremost Grammy gurus.

As he writes in Billboard, “It’s already easy to foresee a showdown between two clear single-monikered front-runners, both of whom happen to be on Columbia Records in the U.S.: Ladies and gentlemen, it’s Adele vs. Beyonce.” Willman got the scoop directly from anonymous recording academy voters. Read his entire analysis here.

Adele is already a Grammy champ for Album of the Year. She swept the awards for her blockbuster sophomore album, “21” (2011). To date she has won 10 Grammys overall, and she has only ever lost three times when nominated. She hasn’t been defeated since 2009, when her “Hometown Glory” lost Best Female Pop Vocal to – wait for it – “Halo,” by Beyonce.

Adele returned last fall with her third album, “25,” which broke the record as the biggest first-week seller since Nielsen SoundScan started tracking purchases in 1991 – it moved 3.38 million records, besting the 2.41 million sold by N Sync’s “No Strings Attached” in 2000. As of this writing it is eight-times platinum, and the video for its lead single, “Hello,” has been viewed more than 1.5 billion times.

But Beyonce has won twice as many Grammys as Adele (20), and she’s also the most nominated woman in the history of the awards. At only 34-years-old she’s got plenty more time to rack up nominations and wins. And soon she’ll probably overtake Alison Krauss as the biggest female winner in the awards’ history; Krauss has won 27 times.

[HOT FORUM TOPIC] Radiohead’s ‘A Moon Shaped Pool’:
Finally a Grammy for Album of the Year?

However, the Album of the Year prize still eludes Beyonce. She’s been nominated twice before: for “I Am … Sasha Fierce” (2009), which lost to Taylor Swift‘s “Fearless,” and for her self-titled album in 2014, which unexpectedly lost to Beck’s “Morning Phase.” But Beyonce’s recently released “Lemonade” is a cultural phenomenon and her most acclaimed album to date – in fact, it’s the single most acclaimed album of 2016 so far according to MetaCritic.

So who will win? History has shown us that Grammy voters strongly prefer adult contemporary artists like Adele to R&B/hip-hop musicians like Beyonce, but might they finally make an exception? In any other year either of their albums would seem too big to fail with awards voters, but they can’t both win. Vote in our poll below, and click here to discuss next year’s Grammys in our message boards.