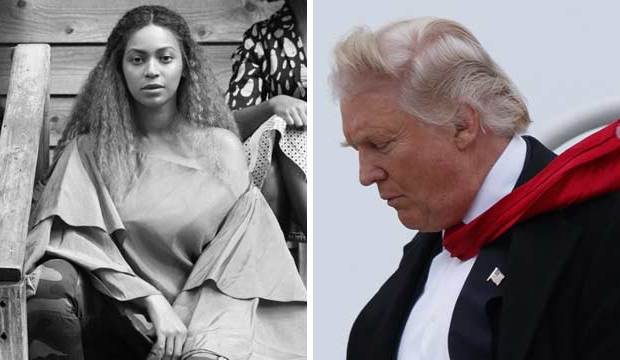 Could Donald Trump help Beyonce win a Grammy for Album of the Year? It sounds improbable, but music and politics are no strangers to each other; protest songs have a long and storied history from Bob Dylan to Kendrick Lamar. Beyonce never references Trump directly in her album “Lemonade,” but its political overtones could prompt the Grammys to cast a protest vote against our president-elect, just like they did a decade ago when Dixie Chicks refused to “shut up and sing” in the face of George W. Bush.

In 2003 Natalie Maines, the Texas-born lead singer of the Dixie Chicks, stated, “We don’t want this war, this violence, and we’re ashamed that the President of the United States is from Texas.” These remarks, which were targeted at then-president Bush and the impending invasion of Iraq, stirred up a controversy that sparked boycotts from various conservative media outlets and country radio stations across the US, resulting in declining record sales for the trio. And that’s nothing compared to the risk to their own safety: Maines also began to receive death threats for her comments.

A year later, Bush won reelection, to the chagrin of many within Hollywood. By that time it seemed that most of those who worked within the entertainment industry had become critical towards the president and were outspoken against the war in Iraq.

The backlash that Maines and the Dixie Chicks received inspired their next album, “Taking the Long Way” (2006), most notably on the lead single, “Not Ready to Make Nice,” which specifically addressed the threats that had been directed towards them:

The album was a commercial and critical success and resulted in five Grammy Award wins, including a sweep of the three top categories: Album of the Year, Record of the Year and Song of the Year (the latter two for the aforementioned “Not Ready to Make Nice”).

Fast-forward to 2016.  Beyonce issues “Lemonde,” the most critically-acclaimed release of her nearly-two-decade-long career (boasting an impressive MetaCritic score of 92).  The album, which streaming service Tidal described as “every woman’s journey of self-knowledge and healing,” derived its title from a speech her husband Jay-Z‘s grandmother Hattie White had made: “I had my ups and downs, but I always find the inner strength to pull myself up.  I was served lemons, but I made lemonade.”

Following the historic 2008 election that resulted in Barack Obama becoming America’s first black president, Hillary Clinton‘s hopes of crossing another historic barrier by becoming the first female president were bolstered by the support of many A-list celebrities, including Beyonce herself.  Perhaps even more than with Bush in 2004, many outspoken members of the media and entertainment industry have voiced their opposition to Trump, as accusations of racism and sexism became recurring arguments.

Grammys by the numbers: What are the best selling albums up for Album of the Year?

In his review of “Lemonade,” Andy Kellman (AllMusic) wrote that Beyonce “delights in her blackness, femininity, and Southern origin with supreme wordplay.” And her song “Formation” and its accompanying video include references to black empowerment, police brutality and Hurricane Katrina. A vote from the recording academy for Ms. Knowles-Carter could thus be seen as a stand against Trump’s racist rhetoric, much like their vote for the Dixie Chicks 10 years ago was largely a response to their distaste for Bush and those who hoped to keep artists quiet.

“Shut up and sing,” some music-listeners said. The Dixie Chicks refused to “make nice,” to which Beyonce now adds, “You know you that bitch when you cause all this conversation.” That conversation may end with a Grammy sweep.

Make your Grammy predictions now; change them till Dec. 6

Gold Derby readers just like YOU often turn out to be our smartest prognosticators, so it’s important that you give us your predictions. You can continue to update and change your forecasts as often as you like before nominations are announced on Dec. 6.  Just click “Save” when you’ve settled on your choices. You’ll compete to win a $100 Amazon gift certificate, bragging rights and a place of honor on our leaderboard. Our racetrack odds change as you make your predictions, just as they do when you bet on the Emmys, Oscars, Golden Globes and more. Be sure to read our contest rules and sound off on the Grammy race in our music forum.