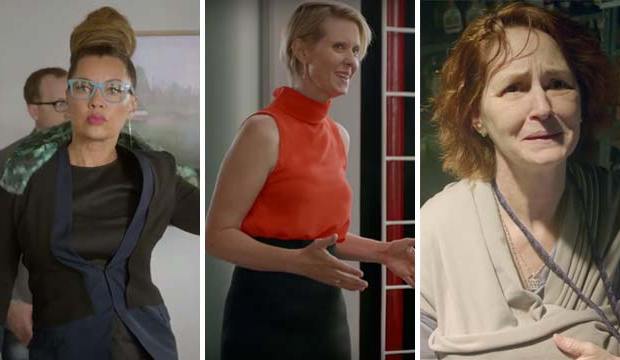 Despite critical acclaim for its first two seasons (including back-to-back Criticsâ€™ Choice nominations for Best Comedy Series and Best Comedy Actress for Ilana Glazer) â€œBroad Cityâ€ failed to gain any traction in the Emmy race. But its third season, which concluded on April 20, could give the comedy its best shot yet at earning its first Emmy nomination (or even second and third!) .

While the show and its stars Glazer and Abbi Jacobson still face steepÂ competition in the Comedy Series and Comedy Actress categories, there is strong potential in the guest acting races. The third season included a parade of guest appearances by award-winning and high-profile actors, any one of whom could finally earn â€œBroad Cityâ€ the Emmy recognition it deserves.

Oscar-winner Melissa Leo provided the seasonâ€™s meatiest guest spot as the owner of a Brooklyn food co-op that Jacobson works for while pretending to be Glazer. Leoâ€™s performance is the antithesis of the dramatic film roles we best know her for â€“ think â€œThe Fighterâ€ or â€œPrisonersâ€ â€“ letting voters see a fresh side of her talent. Leo will likely also contend for Movie/Miniseries Supporting Actress for â€œAll the Way,â€ so sheâ€™s a name that will surely be on the minds of voters already. And don’t forget that Leo already won Comedy Guest Actress once before, for her turn in “Louie” in 2013.

Voters could also look to awards darling Cynthia Nixon (an Emmy, Grammy and Tony champ), who appeared in the famous Hillary Clinton episode as an employee on Clintonâ€™s campaign staff. Nixonâ€™s interactions with Glazer, who temporarily volunteers with the campaign, are fantastic and even reminiscent of the business-focused role she played to an Emmy win as Miranda on â€œSex and the City.â€ On top of that, the same episode features six-time Emmy winner Alan Alda and “SNL” alum Rachel Dratch, who have short but noteworthy scenes of their own.

Meanwhile, EGOT winner Whoopi Goldberg provided one of the most buzzworthy appearances on the show dancing as her â€œSister Actâ€ character at the tail-end of the episode “Game Over.” She may be unlikely to get any traction for that brief cameo, but that episodeâ€™s other guest star, three-time Emmy nominee Vanessa Williams (â€œUgly Bettyâ€), gets lots more screentime and could get lots more awards attention. Williams plays another of Glazerâ€™s temporary employers, who shares a unique bathroom habit in common with Glazer to hilarious effect.

Which “Broad City” guest do you think is most deserving of Emmy recognition? Vote in our poll below.