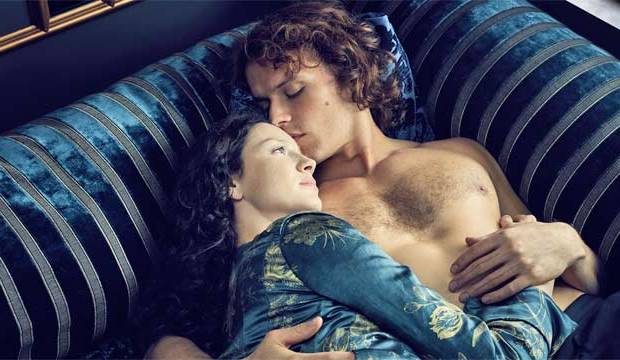 After season one of “Outlander,” Caitriona Balfe earned a much-deserved bid for Best Drama Actress at the Golden Globes where “Outlander” was also nominated for Best Drama Series and Best Supporting Actor (Tobias Menzies). Unfortunately, Sam Heughan was overlooked.

The hit Starz series struck out three times, but right now Emmy voting is under way, so it may come roaring back for season two. At the Emmys, “Outlander” has many more chances for recognition, since there are lots of categories for the program’s impressive crafts — costumes, music, cinematography, editing and more — in addition to acting, writing, directing and Best Drama Series.

Can Caitriona Balfe finally be recognized by her peers in the television industry? She didn’t make the list last year, but her performance was especially enriched in season two by shocking plot twists that included poisonings, betrayals, reluctant sex with the King of France and the miscarriage of a baby girl. If Balfe gets nominated she plans to submit the poignant episode in which she loses the child and then sings to the dead baby in her arms (“Faith”) as her sample episode to be weighed by the judges.

Several experts polled by Gold Derby believe she will be nominated (see predictions), including Lynette Rice (Entertainment Weekly), Ken Tucker (Yahoo), Paul Sheehan (Gold Derby) and myself. The experts give her 27-to-10 racetrack odds. You can increase her odds by making your Emmy predictions here.

Below: cast your vote and watch my interview with Balfe as she discusses what it was like to be in the Golden Globe running and to attend the ceremony with Heughan and Menzies.

RSVP here to watch the debuts of our upcoming Q&As with top Oscars and TV Award contenders here. Or watch some of the great video discussions already posted for you to view.

FILM SHORTS ON THE OSCAR SHORT LISTS: TODAY Jan. 20 at 4 p.m. PT — RSVP to see the debut of our interviews with the creators of “Coded” (Ryan White), “Lynching Postcards” (Christine Turner), “The Musician” (Reza Riahi), “Robin, Robin” (Mikey Please) and “Sophie and the Baron” (Alexandria Jackson).

FILM DOCUMENTARY OSCAR FINANLISTS (PART 2): TODAY Jan. 20 at 6 p.m. PT – RSVP to the debut of our revealing riffs with the creators of documentaries that made it onto the Oscar shortlist of potential nominees.
“Summer of Soul” (Questlove), “Ascension” (Jessica Kingdon), “Flee” (Jonas Poher Rasmussen), “The First Wave” (Matthew Heineman), “In the Same Breath” (Nanfu Wang), “The Velvet Underground” (Julie Goldman).

RSVP NOW to our “Meet the Experts” Oscar chats with contenders for best sound, music scores and songs, documentaries, shorts and more. Each event includes solo Q&As followed by a lively roundtable discussion.

Caitriona Balfe on why 'Belfast' resonates: 'A little bit of magic happens when you make a film'…

Jamie Dornan ('Belfast'): 'I lost my dad to Covid, and this movie would've meant so much to him'…

After 656 long days, the 'Outlander' droughtlander will end on March 6 with Season 6 on Starz

Oscar Experts predictions slugfest: A house of Oscars for 'House of Gucci' and Lady Gaga…