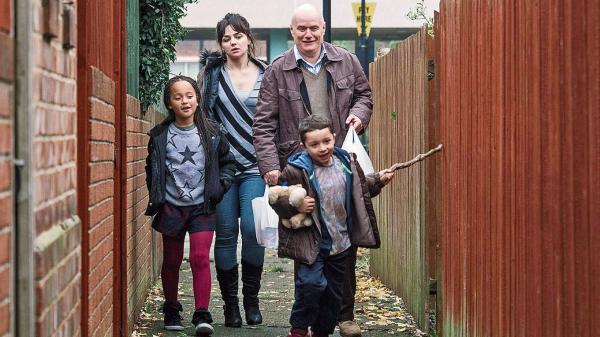 However, given the spotty Oscar record of non-American English-language winners of the Palme d’Or, the prospects for Loach may not be as promising as they might seem. Had the honor gone to one of the foreign language contenders, the outlook might be more rosy. Five Palme D’Or champs have gone on to win the Foreign-Language Film Oscar: “Black Orpheus” from France (1959); “A Man and a Woman” from France (1966); “The Tin Drum” from West Germany (1979); “Pelle the Conqueror” from Denmark (1988);  and “Amour” from France.  And eight others were nominated for that Oscar: “Keeper of Promises” from Brazil (1962),=; “The Umbrellas of Cherbourg” from France (1964); “Kagemusha: The Shadow Warrior” from Japan (1980); “Man of Iron” from Poland (1981); “When Father Was Away on Business” from Yugoslavia (1985); “Farewell My Concubine” from Hong Kong (1993); “The Class” from France (2008); and “The White Ribbon” from Germany (2009).

The film with the most Oscar buzz going into Cannes was Jeff Nichols‘ “Loving,” which tells the true story of an interracial couple in Virginia that started a legal fight which culminated in the Supreme Court ruling laws prohibiting such unions to be unconstitutional. While the film did earn very positive press, it went home with no prizes. Other widely praised films that left the Croisette empty-handed included: Kleber Mendonça Filho‘s “Aquarius,” Paul Verhoeven‘s “Elle,” Park Chan-Wook‘s “The Handmaiden,” Jim Jarmusch‘s “Paterson,” Cristi Puiu‘s “Sieranevada” and Maren Ade‘s “Toni Erdmann.”

“It’s Only the End of the World” by French-Canadian director Xavier Dolan won the Grand Prix prize at Cannes. Thirteen past winners went on to earn 22 total Oscar nominations with five films scoring seven wins. Each of that quintet — “Investigation of a Citizen Above Suspicion” from Italy (1970); “Cinema Paradiso” from Italy (1989); “Burnt by the Sun” from Russia (1994); “Life is Beautiful” from Italy (1998); and “Son of Saul” from Hungary (2015) — won Best Foreign-Language Film. “Life is Beautiful” also won Best Actor (Roberto Benigni) and Original Dramatic Score.

Shahab Hosseini‘s Best Actor victory for his performance in Asghar Farhadi‘s “The Salesman” could propel him into Oscar consideration. Fifteen winners of that award at Cannes have been nominated by the academy and five have taken home Oscar: Ray Milland for “The Lost Weekend” (1945); Jon Voight for “Coming Home” (1978); William Hurt for “Kiss of the Spider Woman” (1985); Christoph Waltz for “Inglorious Basterds” (2009, Supporting); and Jean Dujardin for “The Artist” (2011). However, his chances might be hurt by his performance being in another language (Persian). Only one non-English language performance by a Best Actor champ at Cannes reaped an Oscar bid: Javier Bardem for “Biutiful” (2010).

Farhadi’s win for Best Screenplay for “The Salesman,” should boost its chances at the Oscars. Three screenplay winners here went on to the Foreign-Language Film Oscar: “Mephisto” from Hungary (1981); “No Man’s Land” from Bosnia and Herzegovina (2001); and “The Barbarian Invasions” from Canada (2003). And two others were nominated: “Footnote” from Israel (2011) and “Leviathan” from Russia (2014). Farhadi won that Oscar race in 2011 with “A Separation,” which was also nominated for Best Original Screenplay.

The Best Actress win by Jaclyn Jose for “Ma’ Rosa” raises her profile. Twenty past Cannes champs received nominations from the Academy and four won: Simone Signoret for “Room at the Top” (1959); Sophia Loren for “Two Women” (1961); Sally Field for “Norma Rae” (1979); and Holly Hunter for “The Piano” (1993). The fact that Jose gives her performance in another language (Filipino) isn’t necessarily a deal-breaker either. In addition to that win by Loren (Italian), Melina Mercouri (“Never on Sunday” in 1960) and Penelope Cruz (“Volver” in 2006) both earned Best Actress nominations for performances in Greek and Spanish respectively.

The Oscar chances for Best Director winners Cristian Mungiu (“Graduation”) and Olivier Assayas (“Personal Shopper”) aren’t very promising. Only six of the helmers who prevailed here went on to contend at the Oscars: Robert Altman for “The Player” (1992); Joel Coen for “Fargo” (1996); David Lynch for “Mulholland Drive” (2001); Alejandro González Iñárritu for “Babel” (2006); Julian Schnabel for “The Diving Bell and the Butterfly” (2007); and Bennett Miller for “Foxcatcher.” Of these, only Schnabel contended for a foreign-language film. Both “Fargo” and “Babel” earned Best Picture nominations.

And the Jury Prize, which went to Andrea Arnold‘s “American Honey,” has little Oscar correlation. Only two English language films that have won the various incarnations of the Jury Prize have gone on to be major Oscar contenders. The first was “All About Eve” (premiering at Cannes in 1951, the year after its formal American release) had been nominated for 14 Oscars and won six including Best Picture and Best Directing for Joseph L. Mankiewicz. The second was “Alfie” in 1966, which was nominated for five Oscars including Best Picture and Best Actor for Michael Caine.

Correction: Due to an editing error, the original version of this article referred to Hosseini’s performance being in Arabic; it is in Persian.

Will 'Better Call Saul' finally break through with an Emmy win?