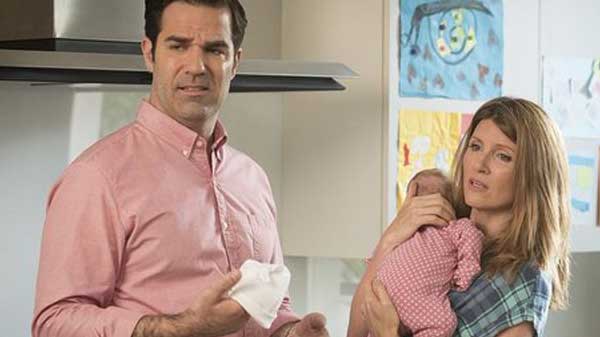 “Catastrophe” heads into Emmy season fresh from a Best Comedy Series nomination at the recent Critics’ Choice TV Awards where it lost to the first season of “Master of None.” Rob Delaney and Sharon Horgan created and star in this heartwarming comedy that streams on Amazon Prime. Dish “Catastrophe” with Hollywood insiders in our notorious forums by clicking here.

“Catastrophe” excels largely due to the chemistry between the two leads and their refreshingly honest writing. He plays an American adman visiting London and she is an Irish school teacher. Their whirlwind week-long fling leads to an unexpected pregnancy, he relocates to London and the two eventually fall in love.

Find out how “Catastrophe” will fare at the Emmys — Click here

That was the basis of the first season of this Channel 4/Amazon co-production, which was also nominated for a Peabody Award. The second six-episode outing debuted on the streaming service in April after unspooling in England last fall. The action has moved ahead a few years. Rob and Sharon are now married, trying to cope the highs and lows of new parenthood, and expecting a second bundle of joy. Horgan earned a BAFTA bid for her work on-screen and the pair shared a writing nomination.

Each season consists of only six episodes, which is typical of British television and makes it so easily digestible (Exhibit A: I eagerly binged the entire series in a couple of sittings). Besides the talented leads, “Catastrophe” also features a strong ensemble cast, which includes Emmy nominee Ashley Jensen (“Extras”) and veteran actress Carrie Fisher (“Star Wars”). It ranks as one of the most critically acclaimed comedies on TV with a jaw-dropping 100% rating at Rotten Tomatoes and an impressive score of 83 at MetaCritic.

The TV academy loves to embrace Brit hit comedies. Ricky Gervais has been remarkably successful at the Emmys with the likes of “Derek,” for which he was nominated for Best Comedy Actor in 2014 and Best Movie/Mini Actor last year; “Extras,” for which he won the Emmy for Best Comedy Actor in 2007 and which racked up an impressive 14 nominations from 2006 to 2008; and the original “The Office,” which landed Emmy nods for Best TV Movie and Best Movie/Mini Writing for its Christmas special in 2005. And “Episodes” has scored multiple Emmy nominations for its leading man Matt LeBlanc and writers.