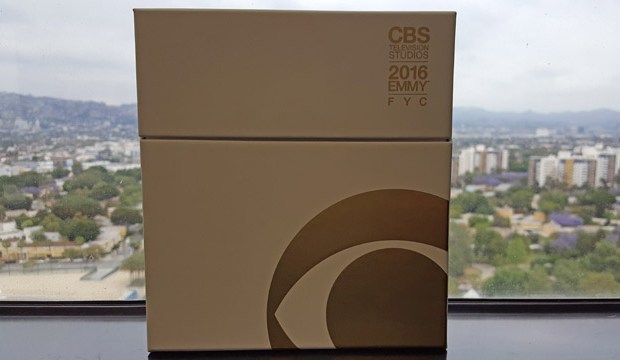 CBS Television Studios just sent its Emmy Awards FYC mailer to all members of the TV academy and it’s setting itself apart from the pack by utilizing the world’s largest digital platform — iTunes — to give voters access to its shows. Take a peek inside the campaign box by scrolling through our photo gallery above.

Christine Baranski in ‘The Good Wife’ series finale:
Just give her the Emmy Award already!

While rival network, cable and digital platforms are sending Emmy voters to their own FYC websites to access more episodes and full seasons, CBS is letting voters watch their offerings for free on iTunes. Far more easily accessible on mobile and tablets with just the touch of an app, this could prove to be a smart move for the Tiffany network.

Do you think “The Good Wife” and “Jane the Virgin” will reap bids in the Drama and Comedy Series races at the Emmy Awards this year? Make your predictions now to be eligible to win our contest prizes ($500 for first place, $300 for second, $200 for third) and then sound off at the bottom of this post or right here in our famous TV forums.