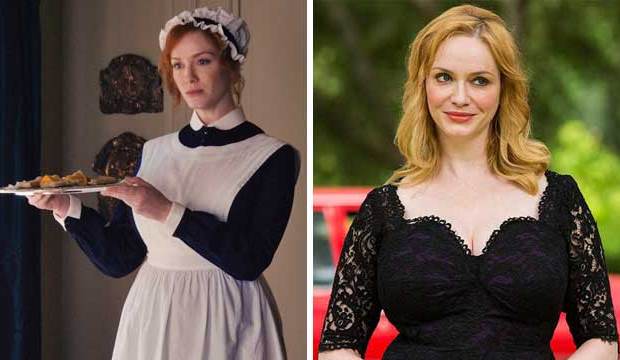 Courtesy of Comedy Central and SundanceTV

Christina Hendricks earned her six consecutive Emmy nominations for Best Drama Supporting Actress (2010-2015) for her role as Joan Harris in “Mad Men” but never won. This year, she has two chances to claim that overdue Emmy: she’s a contender for her supporting work on both Comedy Central’s laffer “Another Period” and SundanceTV’s drama “Hap and Leonard.”

“Mad Men” had notoriously bad luck in the Emmy acting categories, with a cast member winning only one of a whopping 37 nominations over the course of eight years. Jon Hamm claimed Best Drama Actor for the show’s final season in 2015. So maybe a change of scenery will help Hendricks.

Last summer, mere weeks after “Mad Men” signed off, she showed up in “Another Period” as Celine (aka Chair), a new maid with ulterior motives in an aristocratic household in the early 20th century. She’s an Emmy contender for Best Comedy Supporting Actress, which would be her first recognition for being funny after years of the serious business of “Mad Men.”

But Hendricks could show up again in the drama field too. This spring she co-starred in “Hap and Leonard” as Trudy, the ex-wife of Hap (James Purefoy), and she’s been entered for Best Drama Supporting Actress. If she gets in it would be her seventh straight nomination in that race. That would tie her with Nancy Marchand and Betty Thomas as the second most cited performer in the category; Tyne Daly currently holds the record with eight bids.

How will Hendricks do at the Emmys? Make your Emmy predictions right here. You’ll compete to win our contest prizes for best picks — $500 (first place), $300 (second place) and $200 (third place) in Amazon gift certificates — a place of honor on our leaderboard and a starring role in next year’s Top 24 Users (the two dozen folks who do the best predicting this year’s Emmy nominations). Be sure to read our contest rules.

[WATCH] Riki Lindhome ('Another Period'): 'People think it's not based on reality, but in a way it is'…

Emmy predictions: Lena Headey ('Game of Thrones') gets 9-to-5 odds to reign over competition