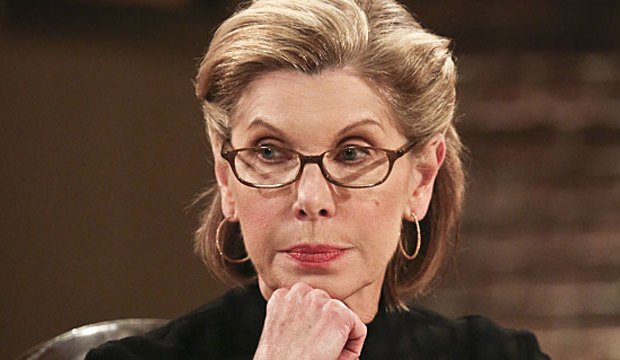 Christine Baranski reaped a fourth Best Comedy Guest Actress Emmy bid for playing Dr. Beverly Hoftstader, Leonard’s intimidating, intellectual psychiatrist mother on “The Big Bang Theory.” This marks the 15th overall nomination in her career and makes up for her inexplicable snub for the final season of “The Good Wife.” Her only Emmy win was on her first nomination for the sitcom “Cybill” back in 1995. She has submitted “The Convergence Convergence,” which is also the same episode as that of rival nominee Laurie Metcalf.

SYNOPSIS
This episode opens with Penny (Kaley Cuoco) encouraging Leonard (Johnny Galecki) to have a second wedding. They had a small ceremony the first time and Penny has learned that Beverly (Baranski) was very upset about not being invited to it. Leonard reluctantly agrees and asks his father (Judd Hirsch) as well as their usual group of friends to attend. Sheldon (Jim Parsons) being Sheldon assumes he should be allowed to invite people also, so he aks his mother (Metcalf).

Leonard’s parents are bitterly divorced and throw vicious verbal barbs at each other throughout the wedding dinner. By the end of the evening Leonard’s dad has struck up a friendship with Sheldon’s mom. After they both get upset by Beverly’s attacks they head off for a nightcap, leaving their sons to worry about what else they might be up to. Will Baranski win her first Emmy Award since 1995? Let’s examine the pros and cons:

PROS
Baranski’s previous visits to the show have usually featured Beverly in a relatively good mood, which for her means an aloof, snobby, condescending intellectual who bonds perfectly with Sheldon but not so much with her alienated and put-upon son Leonard. This episode gives the actress the opportunity to play full-out rage and emerge from the blasé controlled person she usually plays.

The actress has always had a way with a one-liner and her exclamations such as “How dare you invite your father without asking me!” or “What the hell is that supposed to mean?” are classic comedic jewels delivered with a gusto that ranks with some of the great harridans of comedy.

Also in Baranski’s favor is that fans of “The Good Wife” who feel cheated out of the opportunity to vote for her for that show may cast their vote here. Baranski had a strong final episode on that drama where she got to slap Julianna Margulies across the face after a particularly nasty betrayal.

CONS
Baranski’s biggest disadvantage in the race is that most of her scenes include Metcalf, whose sweet character matches that of Beverly; she matches her move for move and is as equally as skilled a performance. Had they been allowed to pair up and submit together as “Saturday Night Live” co-hosts Tina Fey and Amy Poehler did, they might have had a strong chance of taking the category.

Since Baranski was snubbed for “The Good Wife” for the first (and last) time, does that suggest the TV academy is ready to move on from her?