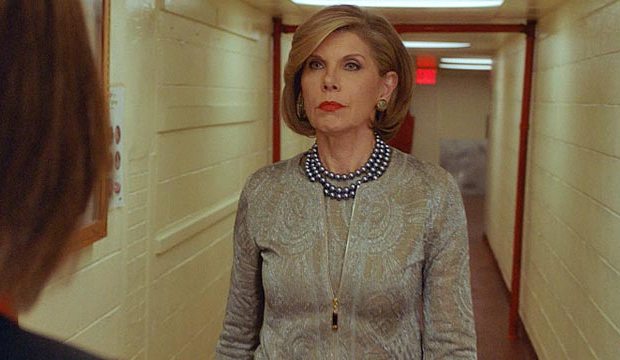 At last, Christine Baranski finally has a bonafide Emmy-caliber showcase for “The Good Wife” after seven years and 156 episodes of playing attorney Diane Lockhart. The one-time winner for the laffer “Cybil” (1995) could finally take home a bookend trophy after six straight losses in the Drama Supporting Actress race if she submits Sunday’s series finale episode. In my earlier Emmy spotlight item on Baranski, I hoped that the last stretch of episodes would provide her with “the bombastic material she needs to clinch a victory.” With the final episode, titled “End,” Baranski has a terrific submission filled with impactful, Emmy-bait scenes.

Throughout “End,” Baranski not only performs Diane’s classic, sophisticated legal posturing during Peter’s trial, but she also battles head-to-head with Julianna Margulies’ Alicia over legal strategy. One of Baranski’s best scenes involves her reaction to Alicia’s betrayal in court when Lucca (Cush Jumbo) undercuts Diane’s husband Kurt (Gary Cole) on the stand, alleging he had an affair with a protege. With the camera focused solely on her face, Baranski brilliantly conveys Diane’s devastation, anger, and ultimate resilience through her tears before she boldly exits the courtroom.

In the last scene of the series, Baranski delivers the biggest shock and most cathartic moment of the episode: Diane confronts Alicia after Peter’s (Chris Noth) press conference and slaps her across the face, mirroring the opening scene of the show’s pilot episode and concluding Baranski’s seven-year performance as Diane with a defiant and twistedly empowering exit.

While reaction to the controversial conclusion of “The Good Wife” has been divided, critics all praise Baranski’s performance in the episode, with many citing it as an example of why she should win an Emmy for the role:

Daniel Fienberg (The Hollywood Reporter): “Baranski’s silent response to Lucca trying to pillory Kurt, culminating in Diane working determinedly out of the courtroom, was a spectacular guarantee of another Emmy nod… In the closing moments, Diane Lockhart became the hero of ‘The Good Wife’… Baranski got to go out strong.”

Ken Tucker (Yahoo TV): “All praise and respect to Christine Baranski for her performance here and throughout the series, and to the Kings for giving her such a terrific final showcase.”

Kayla Kumari Upadhyaya (The AV Club): “Christine Baranski’s performance in that tense and piercing [cross-examination] scene only underscores how absurd it is that she has never won an Emmy for her seven seasons of impeccable work on this show.”

Kathryn VanArendonk (Vulture): “But the most heart-wrenching parallel is the mirrored shot of Diane’s face, as she closes her eyes and takes in what Alicia’s done, followed later by Alicia’s face at the very end, as she stands swaying from Diane’s blow. Christine Baranski’s pained, silent, furious exit from the courtroom is stunning.”

‘The Good Wife’ final season: Will Emmy Awards give it a goodbye hug?

Do you think Christine Baranski will finally win the Emmy by submitting “The Good Wife” series finale? Does Baranski have a better episode from the final season to choose? Chime in with your thoughts in the heated dialogue going on in our TV forums right now.