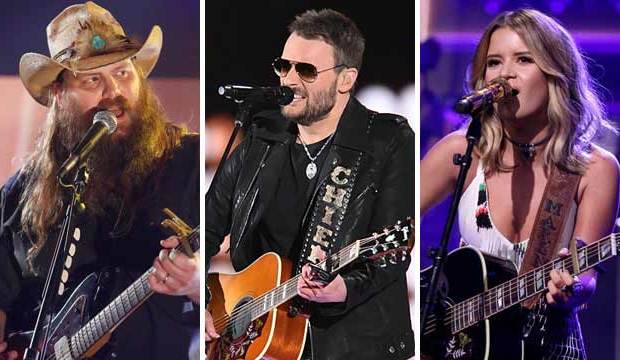 Courtesy of ABC, CBS and NBC

The Country Music Association announced the nominations for their 50th Annual CMA Awards on Wednesday, August 31, and the top nominees are Eric Church, Chris Stapleton and newcomer Maren Morris with five apiece. Click here for the complete list of nominations.

Stapleton was new in 2015 when he unexpectedly swept his categories, winning Album of the Year (“Traveller”) and Male Vocalist of the Year in addition to New Artist of the Year. That telecast, in which he also performed a showstopping duet with Justin Timberlake, was the beginning of a tremendous awards windfall for Stapleton. After the CMAs he was nominated for Album of the Year at the Grammys and won twice in genre categories: Best Country Album and Best Country Solo Performance for the title track. Then he swept the ACM Awards with four victories out of five nominations, including another Album of the Year title.

Now a year later he finds himself nominated for Entertainer of the Year at the CMAs for the first time. He’s also up for Single of the Year (“Nobody to Blame”), Music Video of the Year (“Fire Away”), Musical Event of the Year (“You Are My Sunshine” with his wife Morgane Stapleton), and he hopes to defend his title as Male Vocalist of the Year.

Church has been dropped from the Entertainer of the Year category after earning his first bid last year. His five bids are Album of the Year (“Mr. Misunderstood”); Single, Song and Music Video of the Year (all for “Record Year”); and Male Vocalist of the Year.

Morris only released her first major label studio album, “Hero,” on June 3, but it made a strong enough impression for her to be cited for Album of the Year, Single and Song of the Year (“Mr. Church”), Female Vocalist of the Year and New Artist of the Year. That’s more nominations than Stapleton had last year when he ruled the CMAs, so perhaps Morris is on the way to her own breakthrough awards season.

With four nominations apiece are Keith Urban and returning CMAs host Carrie Underwood, both of whom contend for Entertainer of the Year. It’s Urban’s ninth time in the top race, with one previous victory (2005). Meanwhile, Underwood is nominated for the first time, which is surprising after more than a decade of chart-topping crossover success. Women have been consistently disadvantaged in the Entertainer of the Year category. Only one woman has won in the last 15 years: Taylor Swift (2009, 2011). And in that same time period there has only been one instance when more than one female act was nominated: 2010, when Miranda Lambert and the gender-mixed group Lady Antebellum were both in the running.

Rounding out the Entertainer of the Year category are country legend Garth Brooks, who has won four times (1991-1992, 1997-1998) and is nominated for the 11th time, and Luke Bryan, who is on his fourth nominations and won the last two years in a row. But this is the only nomination for Brooks, and Bryan has just one other bid: Musical Event for “Home Alone Tonight” with Karen Fairchild. Does that put them at a disadvantage?

Winners will be presented at a live ceremony hosted once again by Underwood and Brad Paisley on Wednesday, November 2, on ABC.