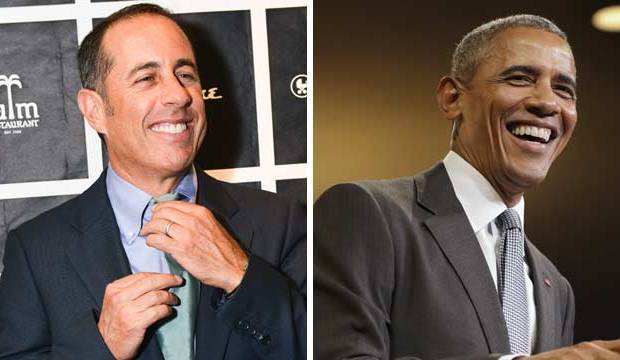 “Comedians in Cars Getting Coffee” was one of this year’s biggest Emmy surprises, picking up a nomination for Best Variety Talk Series. The online series starring Jerry Seinfeld, which streams on Crackle, previously earned bids for Best Short-Format Nonfiction in 2013 and 2014 before earning a promotion to this year’s variety contest. Can it win this top race? Its episode submission features President Barack Obama, which should be tough to beat, right? Maybe not – the Commander-in-Chief has a mixed track record at the Emmys.

Obama has embraced mass media unlike any president in American history, and when the leader of the free world visits your TV show, chances are good it’ll be the highlight of your year. That’s probably why we’ve seen him show up in so many Emmy submissions. What’s surprising is that those episodes rarely win.

The most famous instance of the Obama jinx was in 2010 when it looked like “The Daily Show with Jon Stewart” would finally loosen its stranglehold on Best Variety Series. It entered an episode that poked fun at CNN pundit Roland Martin‘s ascot. That seemingly lightweight entry was up against Conan O’Brien‘s epic final episode of “The Tonight Show,” Betty White‘s instant-classic episode of “Saturday Night Live,” and “The Colbert Report” in Iraq, where its host welcomed President Obama via satellite. Despite that fearsome competition, “The Daily Show” still won.

Find out how “Mr. Robot” will do at the Emmys this year — Click Here

But maybe voters weren’t impressed that Obama was beamed in from afar. If he would show up in person, surely voters would take notice, right?

Unfortunately for “MythBusters,” that didn’t work either. In the 2011 race for Best Reality Program, the long-running Discovery Channel series entered “President’s Challenge,” in which Obama tasked hosts Adam Savage and Jamie Hyneman with revisiting a myth about using hundreds of mirrors to recreate an ancient, incendiary death ray. They busted the myth, and the TV academy busted their Emmy hopes, giving the award to “Deadliest Catch” instead.

Obama couldn’t even win the ladies of “The View” a Daytime Emmy when he became the first sitting president to appear on a daytime talker. They entered his appearance for consideration for Best Talk Show Host in 2011, but even though there was a tie in that category, the “View” hosts were still left out. Voters picked Regis Philbin and Kelly Ripa (“Live with Regis and Kelly”) and Mehmet Oz (“Dr. Oz”) instead.

But the Obama curse was finally broken in 2014 when the Zach Galifianakis online series “Between Two Ferns” invited Obama to trade comic barbs while promoting online enrollment for the Affordable Care Act. That appearance won Galifianakis the award for Best Short-Format Entertainment – not for Obama himself, though, since the commander-in-chief didn’t get a producer credit.

Seinfeld is hoping for similar luck with his own online chat show. He is a TV legend thanks to his self-titled NBC sitcom, but he has fewer Emmys than most probably realize. He’s actually only won once: Best Comedy Series as a producer of “Seinfeld” in 1993. He lost his 15 other races, which have included bids for writing, acting and producing.