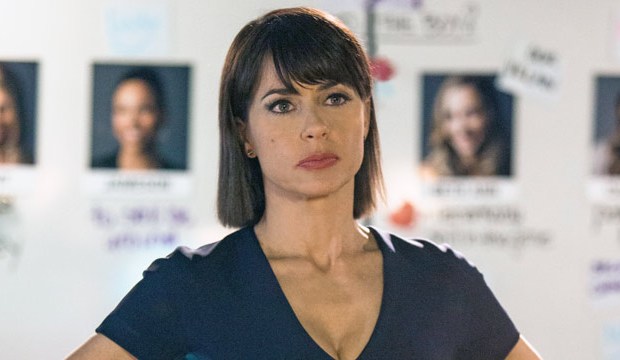 Can Drama Supporting Actress nominee Constance Zimmer take home the Emmy for “UnReal?” It’s the actress’ first nomination after plum roles on “House of Cards,” “Entourage,” and “Boston Legal.” She stars in this Lifetime series as Quinn King, the manipulative, hard-as-nails producer of a reality dating competition show who will stop at nothing for good ratings. With a win from the Critics Choice awards under her belt, Zimmer is a strong contender for her episode submission, “Mother.”

SYNOPSIS
Sensing another meltdown, Quinn sends her protege, Rachel (Shiri Appleby), away for some much needed R&R. She uses the time to hit up her mother, a prominent psychiatrist, for some money instead. Meanwhile, Quinn and Chet (Craig Bierko) engage in some extramarital fun that ends with the coke-addicted producer being rushed to the hospital for chest pains. While there, Chet’s pregnant wife, Cynthia (Sonya Salomaa), admits to knowing about their affair, and reminds Quinn that should he die from all the on-set partying, she’ll collect a hefty life insurance policy, while Quinn will be left with nothing.

Things are falling apart on the “Everlasting” set when an intimate date between bachelor Adam (Freddie Stroma) and three lucky ladies hand-picked by his leering best friend (Tom Brittney) dissolves into a pool party that yields no usable footage. Quinn dispatches Rachel to find a storyline for the episode, and she gets just that by using Anna’s (Johanna Braddy) eating disorder to pit her against another contestant. The next morning, the surrogate mother-daughter team share a poolside cigarette, watching as the havoc they’ve created unfolds.

Can Zimmer win for this episode? Let’s check the pros and cons:

PROS
Zimmer brings nuance and humanity to what could have easily been a one-note performance. This episode alone encapsulates the range of emotion she’s required to convey, from hiding her vulnerability while Chet is in the hospital, to gripping Rachel’s face in her hand and demanding she bring her a juicy storyline. It’s the stuff that Emmy dreams are made of.

She’s the critics’ choice, as the BFCA proved.

THREE “Game of Thrones” nominees? Are Emilia Clarke, Lena Headey, and Maisie Williams headed for a vote split? If so, Zimmer could benefit, as could Emmy-favorite Maggie Smith (“Downton Abbey”) and Golden Globe champ Maura Tierney (“The Affair”).

CONS
Zimmer has a lot of fun indulging in Quinn’s nastiness, drawing perhaps on some past experiences with cut-throat producers. Could the role hit too close to home for some people within the TV academy?

With its mix of sex, drugs, and reality TV, is the show too trashy for more high-minded voters?

This is a highly competitive category. Both Clarke and Headey are on their third bids without a win. If this race comes down to a battle of the divas, Cersei Lannister may be considered more overdue than Quinn King. Plus, it’s “Downton’s” last season, and you just can’t count out Dame Maggie. Oh, and did we mention Tierney submitted a drunk episode?