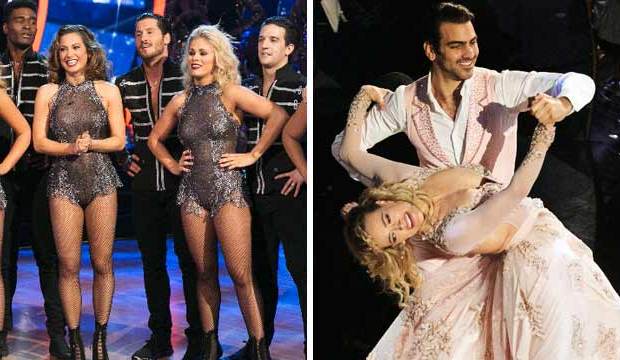 Paige VanZant and Ginger Zee turned “Icons Night” into ladies’ night on “Dancing with the Stars,” receiving the first perfect scores of the season for their individual dances, but then the men turned the tables during a battle-of-the-sexes round of group performances. What did you think of week seven of the competition?

Zee and VanZant’s performances couldn’t have been more different, but they were both perfect, scoring 30 out of 30 from the judges. Zee delivered an elegant Viennese waltz to Whitney Houston‘s “I Have Nothing” that Len Goodman called “a cool breeze on a warm summer’s day,” while VanZant performed an energetic jive to Tina Turner‘s “Proud Mary” that the typically understated Bruno Tonioli thought was “scorching, almost illegally hot.”

Naturally, Zee and VanZant were on top of the judges’ leaderboard when the competition switched gears to a team battle that pitted the remaining four male celebs – Antonio Brown, Nyle DiMarco, Von Miller and Wanya Morris – against the women – Zee, VanZant, Jodie Sweetin and Kim Fields. The men won that round with a showstopping number inspired by James Brown that scored 28 out of 30. The women followed with an ambitious routine in homage to Beyonce, but the judges thought they made more mistakes and were occasionally out of sync. They scored 25, three points lower.

As a result, DiMarco took over the top of the leaderboard. He had also scored 28 for his individual foxtrot – almost 29, but there was yet another scoring mishap where Tonioli officially entered a nine but raised his 10-paddle instead. That gave him a total of 56 out of 60, just one point ahead of Zee and VanZant, who ended up tied with Morris for second place. Check out the night’s combined leaderboard below:

The night ended with the dreaded double elimination, and as our readers predicted in today’s poll Kim Fields and Von Miller were the two sent packing. That leaves Jodie Sweetin at the bottom, even though she got her highest score yet on her individual dance (26 out of 30). Can she survive another week? The lowest-scoring dancer has been eliminated almost every week this season.

What did you think of tonight’s results, DiMarco’s latest scoring controversy and the team routines? Did the men really outperform the women? Our “DWTS” predictions center is temporarily down as Gold Derby continues its relaunch, but discuss in the comments below, and join the reality TV discussion in our forums.

Tyra Banks returning for 'Dancing with the Stars' season 30, but which judges are coming back with…

'Dancing with the Stars' season 30: ABC renews the competition series for landmark year