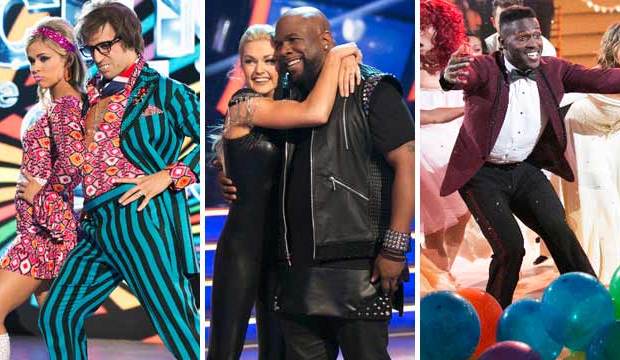 It wasn’t a big surprise that NFL legend Doug Flutie was eliminated from “Dancing with the Stars” on “Famous Dances” night; he had landed at or near the bottom of the judges’ leaderboard for several weeks, and viewer votes could only save him for so long. But the remaining eight celebs are so evenly matched that no one is safe from here on out. After Flutie’s ouster, there is only one point separating fourth place from dead last. The scores were as follows:

Tied for last place are Kim Fields, Von Miller and Ginger Zee, but that doesn’t mean they danced poorly. They all received respectable eights from judges Carrie Ann Inaba, Len Goodman and Bruno Tonioli. It’s a testament to how high the standard has become: you now need nines just to keep up. And all of the remaining contestants are capable of those numbers. Just look at Zee, who may be at the bottom now but had the top score just two weeks ago on “Disney Night.”

Boyz II Men singer Wayna Morris rose to the top for the third time this season thanks to his homage to ‘N Sync‘s “Bye Bye Bye,” though he was just shy of perfection. He received 10s from Inaba and Tonioli, but Goodman was the lone holdout, giving him a nine. Nevertheless, that’s more 10s than anyone else has gotten for a single dance this season, unless you count Nyle DiMarco‘s unusual scoring snafu last week.

Like Morris, DiMarco has gotten the top score three times this season, but Morris has actually outscored him overall, averaging 24.8 per dance (excluding marks from guest judges), compared to 24.5 for VanZant and 24.3 for DiMarco. Expect all their numbers to go up as their performances continue to improve and the judges keep getting more generous, as they typically do when the season narrows down to its top contenders. Could these be the three dancing in the finals for the Mirror Ball Trophy?

Our “Dancing with the Stars” predictions center is down temporarily while Gold Derby continues its relaunch, but in the meantime vote in our poll below: Who do you think gave the best performance on “Famous Dances” night? Did the judges get it right?