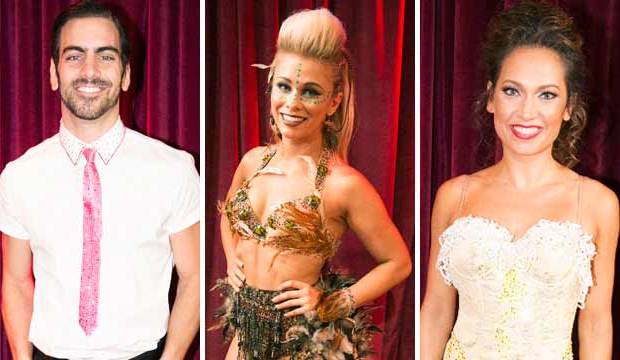 Last week “Dancing with the Stars” eliminated both Wanya Morris and Antonio Brown from the season 22 lineup, leaving the final three: model Nyle DiMarco, UFC fighter Paige VanZant and “Good Morning America” meteorologist Ginger Zee. Who are you rooting for? Vote in our poll below, and keep voting until the Mirror Ball Trophy is awarded on Tuesday, May 24.

DiMarco has been a favorite of judges and viewers since the beginning, and he’s a proven winner, having prevailed last fall in the final season of “America’s Next Top Model.” Completely deaf, he has performed mostly stellar routines without the benefit of hearing the music, thanks in large part to the coaching of his pro partner Peta Murgatroyd, who is aiming for her second Mirror Ball title, following her victory in season 14 with football player Donald Driver.

[POLL] ‘Dancing with the Stars’: Which eliminated celeb would YOU bring back?

VanZant is the youngest dancer in the finals at age 22. Though she’s currently a mixed martial artist she danced for years as a child, and it shows: as of last week’s semifinals, she’s the highest scoring dancer left in the competition, one point ahead of DiMarco (not counting guest judges). She’s partnered with longtime “DWTS” pro Mark Ballas, who won season six with figure skater Kristy Yamaguchi and season eight with gymnast Shawn Johnson, so he has a strong track record with athletes.

Zee, meanwhile, has been a dark horse all season. She tied for the top judges’ score in week one, but after that she flew under the radar for a while despite continued strong performances, including top-scoring routines on “Disney Night” and “Icons Night.” But she’s peaking at the right time, and her partner is also a Mirror Ball champ: Val Chmerkovskiy, who won with Rumer Willis in season 20.

So which of these finalists deserves to win season 22? Vote below, and make sure to discuss all things reality TV in our forums.