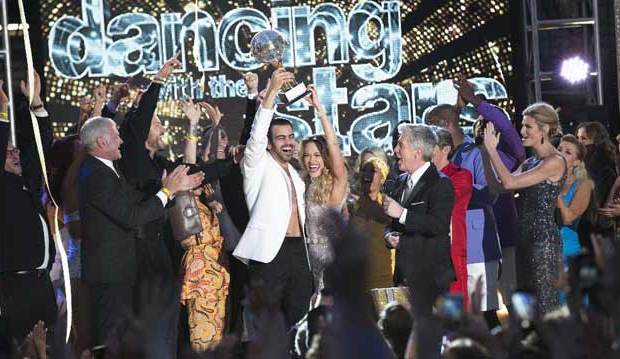 After 10 weeks of performances, season 22 of “Dancing with the Stars” came down to model Nyle DiMarco, mixed martial artist Paige VanZant and meteorologist Ginger Zee. DiMarco was our readers’ favorite according to our recent poll, and it turned out he was the viewers’ favorite too – DiMarco won the Mirror Ball Trophy!

The 24-Hour Fusion Challenge may have helped put him over the top. The finalists performed one last dance prepared in just one night that combined two different styles, and DiMarco scored a perfect 30 out of 30 for his cha cha/tango. Meanwhile, Zee made a mistake during her Argentine tango/foxtrot that earned her just 27. Combined with their scores from Monday night, that moved DiMarco into second place ahead of Zee, and the viewer vote took care of the rest. Top-scoring VanZant finished as the season’s runner-up.

It almost goes without saying that DiMarco is the first deaf contestant to win “Dancing with the Stars.” But this isn’t his first reality competition victory. He won the final season of “America’s Next Top Model” last fall. He’s on such a roll he should find another reality show to win as soon as possible – is it too late for him to enter “The Bachelorette”? How about “American Ninja Warrior”?

[WATCH] ‘Dancing with the Stars’: Was Nyle DiMarco’s freestyle really the show’s best ever?

Ballas was partnered with VanZant this season and had to settle for second place. Counting his two victories, this was his seventh time in the finals out of 19 seasons on the show. That’s not a bad birthday present for Ballas, who turned 30 on Tuesday night, though I’m sure he would have preferred the Mirror Ball.

Zee and partner Val Chmerkovskiy took third place. This was Chmerkovskiy’s fifth time in the “DWTS” finals; he won for the first time in season 20 with Rumer Willis after many seasons of trying.

What did you think of the “DWTS” finale? Did the right contestant win? Or do you think VanZant or Zee should have taken the title? Comment below, and click here to discuss all things reality TV in our forums.