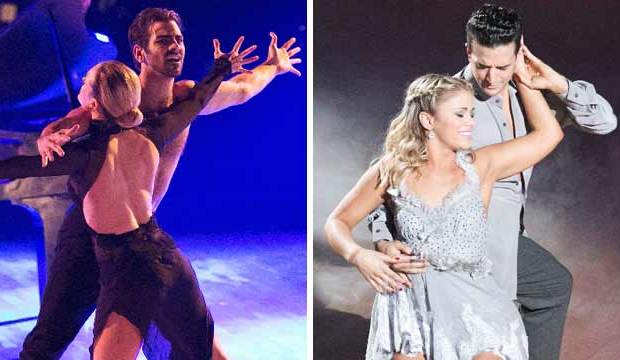 The three “Dancing with the Stars” finalists – Nyle DiMarco, Paige VanZant and Ginger Zee – each performed twice during night one of the two-night finale. So who is in the best position to win the Mirror Ball Trophy on Tuesday night? And who do you think deserves to win? Vote in our poll at the bottom of this post.

According to judge Carrie Ann Inaba, Nyle DiMarco’s freestyle routine with pro partner Peta Murgatroyd was the best she’s ever seen in the show’s 22-season history. It was a contemporary routine choreographed by Talia Favia that DiMarco dedicated to the deaf community. If the judges could have given it 11s they probably would have, but alas it had to settle for straight 10s for a perfect score of 30.

However, DiMarco’s first dance of the night – a redemption dance intended to improve upon a previous routine – didn’t show enough improvement. He and Murgatroyd took on a challenging quickstep after their first was deemed too out of sync on “Famous Dances” night. Their re-do, however, had the same problem, resulting in straight nines for a total of 27. Those missteps left him at the bottom of the leaderboard for the night.

[POLL] ‘Dancing with the Stars’: Which eliminated celeb would YOU bring back?

VanZant ended up at the top of the leaderboard, which isn’t all that surprising since she’s the highest scoring dancer of the season. She was just one point shy of having a perfect night – which means fourth place Wanya Morris is officially the only contestant this season to receive two perfect scores in one night. She and her partner Mark Ballas started with a redemption salsa – Ballas had to sit out their first attempt due to a back injury in week two. Judges Inaba and Bruno Tonioli gave it 10s, but Len Goodman thought it was lacking hip action and gave her a nine. Their freestyle, however, received 10s across the board.

Zee entered the event having injured her back while training, but she and partner Val Chmerkovskiy still managed a strong redemption routine – a contemporary dance that scored 28 from the judges – and a perfect-scoring Ginger Rogers-inspired freestyle. That put her right in the middle with a total of 58 points for the night, ahead of DiMarco’s 57 and behind VanZant’s 59.

How will that result affect Tuesday night’s season finale? The last time a dancer won without getting the high score during the finals was Donald Driver in season 14, which could put DiMarco at a serious disadvantage. Then again, Driver was partnered with Murgatroyd that season, just like DiMarco is now, so she could defy the odds yet again. And considering the judges’ gushing response to his emotional freestyle dance, DiMarco has the potential to dominate the viewer votes he’ll need to put him in the winner’s circle.

Who are you rooting for to win the Mirror Ball Trophy? Vote in our poll below.