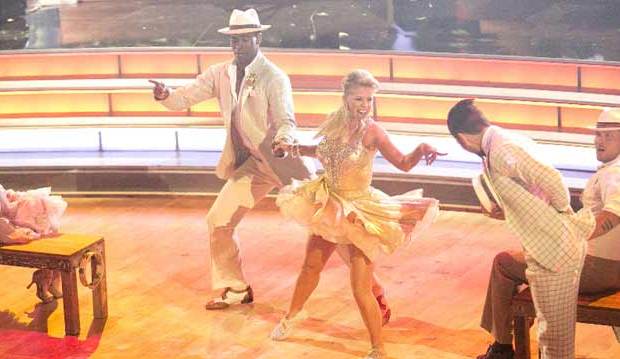 Actress Jodie Sweetin should have had cause to celebrate after the “Judges Team-Up Challenge” on “Dancing with the Stars.” She got her first ever perfect score for her jive with pro partner Keo Motsepe (10s across the board from Carrie Ann Inaba, Len Goodman and Bruno Tonioli).

In the second half of the competition the remaining couples grouped together into three teams of four, and she reigned again. She and Keo joined model Nyle DiMarco and his pro Peta Murgatroyd for a paso doble coached by Tonioli that was nearly perfect: they got 10s from Inaba and Goodman, while viewers at home filled in for Tonioli to give the third score and gave them a 9. That put Sweetin on top of the leaderboard for the night overall, tied with meteorologist Ginger Zee.

Fantastic! … But then Sweetin was eliminated.

That wasn’t entirely surprising. Our readers predicted that result in our poll. Almost half of them (49.25%) forecast her elimination. That’s because, even after greatly improving from week to week, she landed at the bottom of the judges’ leaderboard on “Icons Night,” and all but one bottom-ranked contestant has been sent home this season.

So does that mean Wanya Morris is doomed? The Grammy-winning Boyz II Men singer has consistently been at or near the top of the leaderboard, but this was an unusually bad night for him. His jive with partner Lindsay Arnold received 25 out of 30, the lowest score of the night, so even his near-perfect samba with Zee couldn’t keep him out of last place.

After the two dances were combined, the final leaderboard was as follows:

Do you think Morris will be eliminated despite weeks of strong performances? Antonio Brown has struggled more throughout the season and finished just out of last place this time aroubd, so could he get the axe instead? He’s the last footballer standing after the eliminations of NFL stars Doug Flutie and Von Miller.