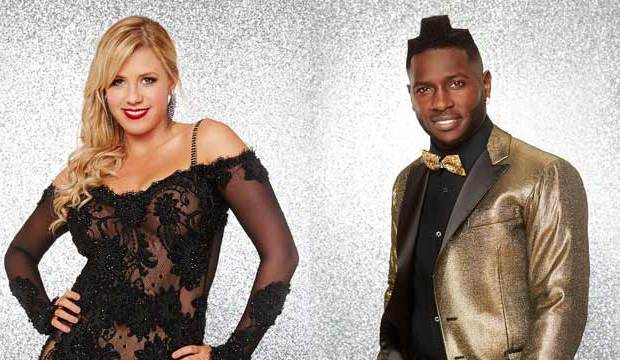 Last week’s double elimination on “Dancing with the Stars” cut the cast from eight contestants to six — 25% of the celebs out in one fell swoop. The unlucky stars sent home were actress Kim Fields and football player Von Miller, which narrows the competition down to football player Antonio Brown, model Nyle DiMarco, singer Wanya Morris, actress Jodie Sweetin, MMA fighter Paige VanZant and TV meteorologist Ginger Zee. We’re getting down to the wire, so who do you think will be sent home next?

Last week the dancers performed twice. First they performed individual dances inspired by icons like Stevie Wonder, Whitney Houston and Tina Turner. Then they teamed up for a pair of group dances pitting the women against the men. In the first round VanZant and Zee were dominant, receiving the first perfect scores of the season — 30 out of 30 from judges Carrie Ann Inaba, Len Goodman and Bruno Tonioli. But the men outscored the women during the team, which reshuffled the leaderboard, leaving DiMarco with the highest score for the fourth time this season.

Below is last week’s leaderboard with the contestants’ individual dance scores combined with their team scores:

Because the women under-performed during their group routine, Sweetin ended up at the bottom of the leaderboard despite getting her best scores yet on her individual dance — two nines and an eight. That could be very bad news for the “Fuller House” star: almost all of this season’s eliminated contestants have been ousted after receiving the lowest score from judges: Geraldo Rivera, Mischa Barton, Doug Flutie and last week’s unlucky stars Fields and Miller were sent home from the bottom of the leaderboard. The only exception so far this season has been Marla Maples, who was just one point out of last place when she was eliminated.

This has been an unusual trend on “Dancing with the Stars.” Oftentimes the contestant with last-place scores is saved by viewers at home voting frantically to save them, frequently resulting in an elimination for a dancer in the middle of the pack, but this season viewers and judges have been in lockstep.

Do you think that spells disaster for Sweetin, or will she be an exception to this year’s rule? Perhaps it will be Brown instead: he scored just one point out of last place, just like Maples when she was sent home a few weeks ago. Vote in our poll below, and join the reality TV discussion in our forums.