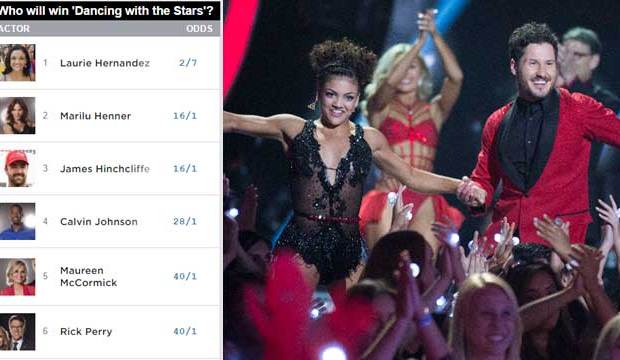 Olympic gymnast Laurie Hernandez maintains her lead in week three of our “Dancing with the Stars” predictions. After getting the top judges’ score for two weeks in a row, she gets overwhelming 2/7 odds to win the Mirror Ball Trophy. That’s exactly where she stood in last week’s predictions as well. Do you think anyone can catch her?

Photo Gallery: Every winner of ‘Dancing with the Stars’ to date

Gold Derby readers just like YOU often turn out to be our smartest prognosticators, so it’s important that you give us your predictions. You can continue to update and change your forecasts throughout the week, just click “Save” when you’ve settled on your choices. You’ll compete to win a $100 Amazon gift certificate, bragging rights and a place of honor on our leaderboard. Our racetrack odds change as you make your predictions, just as they do when you bet on the Emmys, Oscars, Golden Globes and more. Be sure to read our contest rules and sound off on the season of “Dancing with the Stars” in Gold Derby’s reality TV forum.

Maintaining her second-place position is actress Marilu Henner, but she has slipped a bit, getting 16/1 odds down from 14/1 odds last week. She got the third highest judges’ scores in week one and the fourth highest in week two. However, she’s partnered with “Dancing with the Stars” legend Derek Hough, who has won the Mirror Ball Trophy a record six times.

Tied with Henner at 16/1 odds is race car driver James Hinchcliffe, improving significantly from 22/1 odds last week. The charismatic auto racer has danced consistently so far, though his second-week performance didn’t quite match his first, when he tied with Hernandez as the best-scoring dancer. Nevertheless, this week’s contest entrants think he’s in better position now than he was before.

Also improving in this week’s predictions standings is football player Calvin Johnson, who gets 28/1 odds (compared to 40/1 last week). Both of his dances to date have landed him in the middle of the pack in the judges’ scores, but his charm gives him a major boost.

Unexpectedly, two of the season’s lower scoring dancers have improved to 40/1 odds: actress Maureen McCormick and politician Rick Perry. McCormick greatly improved in the second week of competition, from a judges’ score of 22 out of 40 to a score of 26. Perhaps our contest players are giving her a vote of confidence that her scores will continue to improve. And though Perry has been at the bottom of the judges’ leaderboard for two weeks in a row, he did survive elimination last week — perhaps he’s bulletproof.

Our complete predictions for who will win “Dancing with the Stars” are below:

Do you agree with our odds? Who do you think we’re underestimating? Terra Jole and Babyface delivered stellar performances in week two, but both remain 100/1 underdogs. If you think you know better than the collective wisdom of Gold Derby’s contest entrants, click here to enter your own predictions.

Confused by 'Dancing with the Stars'' judges' vote? The 'tiebreaker' rule…

Matt James ('Dancing with the Stars') was rare early elimination for 'Bachelor Nation': Did judges make…