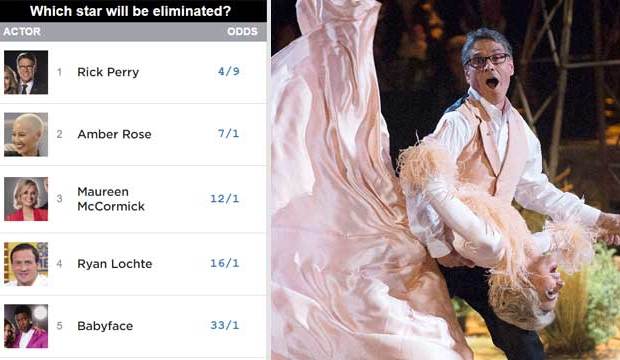 Former Texas governor Rick Perry survived elimination last week on “Dancing with the Stars” even though he was at the bottom of the judges’ leaderboard for two weeks in a row. But that was just a temporary reprieve according to our prediction contest entrants, who expect him to go home this week, giving him leading 4/9 odds. Do you agree?

Photo Gallery: The 10 WORST ‘Dancing with the Stars’ contestants ever

Gold Derby readers just like YOU often turn out to be our smartest prognosticators, so it’s important that you give us your predictions. You can continue to update and change your forecasts throughout the week, just click “Save” when you’ve settled on your choices. You’ll compete to win a $100 Amazon gift certificate, bragging rights and a place of honor on our leaderboard. Our racetrack odds change as you make your predictions, just as they do when you bet on the Emmys, Oscars, Golden Globes and more. Be sure to read our contest rules and sound off on the season of “Dancing with the Stars” in Gold Derby’s reality TV forum.

If Perry proves untouchable again this week, that could be bad news for model and actress Amber Rose, who is next in line for elimination with 7/1 odds. Rose scored 24 out of 40 from the judges last week, which tied her with swimmer Ryan Lochte and eventually-eliminated actor Jake T. Austin as the second-lowest-scoring dancer on the judges’ leaderboard, two points ahead of Perry.

Actress Maureen McCormick might also be vulnerable. She gets 12/1 odds of going home even though she improved in week two of the competition, scoring 26 from judges, up four points from her first dance. So if she’s really in trouble it would be less about her dancing and more that she’s struggling to connect to viewers who are voting at home.

Scandal-plagued Lochte is next with 16/1 odds of elimination. His scores didn’t improve from week to week — he scored a middling 24 both times — which leaves him near the bottom of the judges’ leaderboard. So the question is whether viewers at home admire his tenacity or are weary of the drama surrounding him.

Surprisingly, Grammy-winning singer-songwriter Babyface gets 33/1 odds of elimination even though his dance in week two was one of the highest scoring of the night: he received 30 points from the judges, placing him third behind Laurie Hernandez (32) and Terra Jole (31).

The remaining contestants appear to be safe, each getting distant 100/1 odds of elimination from “Dancing with the Stars.” Our complete prediction rankings are below:

Do you agree with our odds? If you think you know better than the collective wisdom of Gold Derby’s contest entrants, click here to make your own predictions.

Melanie C got screwed on 'Dancing with the Stars': A whopping 96% of fans say her elimination was messed…

Yes, the 'Dancing with the Stars' cast was also confused about how the judges' vote works

America, what have you done? 'Dancing with the Stars' judges shell-shocked by terrible 'Grease Night'…