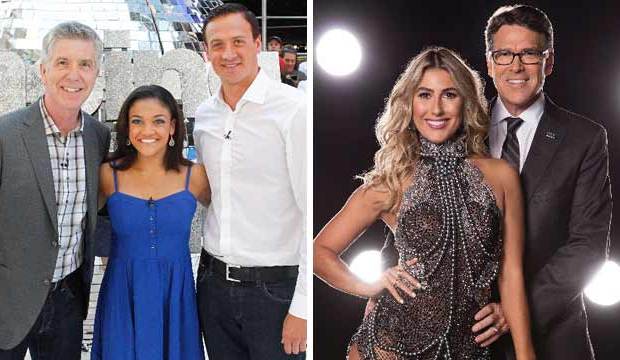 The contestants for season 23 of “Dancing with the Stars” have been announced, and the list consists of the usual combination of actors, athletes and musicians, along with a couple of surprise inclusions ripped from the headlines. The complete list is as follows:

The cast includes Ryan Lochte, confirming the recent rumor that he would be joining this season’s roster. Lochte has won 12 Olympic medals for swimming — including a gold this year in Rio de Janeiro — which makes him the second most decorated Olympic swimmer in history, behind teammate Michael Phelps. But his accomplishments in the pool were overshadowed by his report of a robbery in Rio that was revealed to be significantly embellished.

Joining Lochte is another Olympian: the much-less-controversial Laurie Hernandez, who won a gold medal with the US women’s gymnastics team and received praise for her dance skills during her floor exercise routines. Will she have as much success on “DWTS” as previous Olympic gymnasts? Shawn Johnson won season eight and was the runner-up in the season-15 all-star edition. Then Nastia Liukin finished fourth in season 20, just missing out on the finals.

Then there’s Rick Perry, the Republican politician who served as the governor of Texas from 2000 to 2015 and unsuccessfully ran for president in 2012 and 2016. He was widely ridiculed for his performance during a 2011 debate in which he vowed to close three government agencies, but then forgot one. He has also been criticized for his support of the death penalty and the NRA and his opposition to LGBT rights. Perry follows other right-wing contestants who have appeared on the show in recent years, including TV personalities Tucker Carlson (season three) and Geraldo Rivera (season 22).

Among the pro dancers in this year’s lineup are a couple of high-profile comebacks. Derek Hough took last season off after winning season 21 in fall 2015 with teenage conservationist Bindi Irwin. That was his sixth “DWTS” victory, far more than any other pro dancer in the show’s history, and now he’s partnered with Marilu Henner to try to claim a seventh title. Also returning is Maksim Chmerkovskiy, who after years of attempts finally won the show in season 18 with figure skater Meryl Davis; this is his first time competing since that triumphant year.

What do you think of this year’s cast? Discuss in the comments, and click here to discuss all things reality TV in our forums.