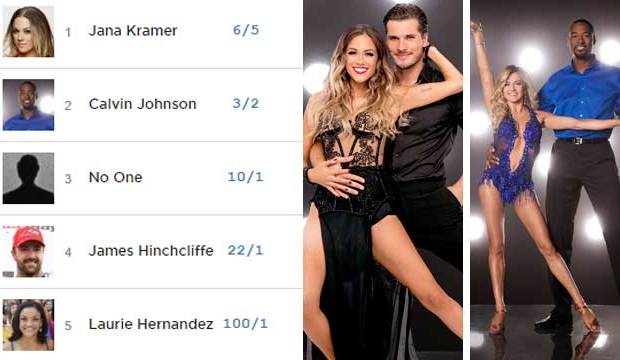 Now that “Dancing with the Stars” has reached the finals, it looks like gymnast Laurie Hernandez and race car driver James Hinchcliffe will safely reach the top three, but who will get the last slot, and who will fall short in fourth place? That’s a much tougher question to answer. See the current standings below, which are based on the current forecasts of our predictions contest entrants as of this writing, and check out our complete racetrack odds for Monday night’s episode of “Dancing with the Stars.”

Kramer gets leading 6/5 odds of being eliminated, but that’s far from certain because right behind her with 3/2 odds is Johnson. In last week’s “Semi-Finals” Kramer finished in third place with 58 out of 60 points from judges, while Johnson finished fourth with 56 out of 60. Since Johnson was at the bottom of the leaderboard, he’d be the logical bet for elimination, but many of our predictions contest entrants are betting he’ll be popular enough with viewers voting at home to overtake Kramer — but just barely. This may just be the closest call for an elimination this season.

After Kramer and Johnson, we think there’s a 10/1 chance that no one will be eliminated and that all four contestants will advance to Tuesday night’s season finale. That’s more likely than the prospect of Hinchcliffe going home, which gets 22/1 odds. And Hernandez, who got the top score last week and has always been a fan favorite, is a virtual lock to advance to Tuesday night’s finale with remote 100/1 odds of elimination.

Do you agree with our odds? Gold Derby readers just like YOU often turn out to be our smartest prognosticators, so it’s important that you give us your predictions. You can continue to update and change your forecasts throughout the week, just click “Save” when you’ve settled on your choices. You’ll compete to win a $100 Amazon gift certificate, bragging rights and a place of honor on our leaderboard. Our racetrack odds change as you make your predictions, just as they do when you bet on the Emmys, Oscars, Golden Globes and more. Be sure to read our contest rules and sound off on the season of “Dancing with the Stars” in our reality TV forum.

'Dancing with the Stars' season 30: ABC renews the competition series for landmark year