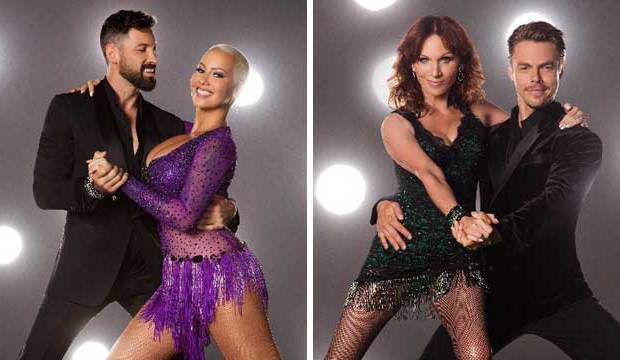 “Dancing with the Stars” fans, now YOU can win prizes by answering Gold Derby’s contest questions every week, like who will get the highest score from the judges, who will get the lowest score and who will be eliminated. And don’t forget our season-long question: Who will win the Mirror Ball Trophy? At the end of the season you’ll score more points for every consecutive week you’re correctly predicting the winner, so it pays off to have great foresight.

Hurry — make your “Dancing with the Stars” predictions for a chance to win a $100 Amazon gift certificate each week. It’s fun and easy, so start now by predicting who — if anyone — will go home in the first week of the competition.

In our predictions center, you get to answer the following questions before each live episode airs on ABC every Monday at 5 p.m. PT / 8 p.m. ET., starting with the season premiere episode on September 12:

Who will win ‘Dancing with the Stars’?

Which star will be eliminated?

Who will receive the judges’ HIGHEST score?

Who will receive the judges’ LOWEST score?

Musicians, already known for their rhythm, have also been successful in the past. Drew Lachey, Nicole Scherzinger and Kellie Pickler won previous seasons coming from musical backgrounds. That could be good news for this year’s musicians: rapper Vanilla Ice, singer-songwriter Babyface and country artist Jana Kramer.

Actors are always well represented on the “DWTS” dance floor, so it’s no surprise the win frequently as well, including Kelly Monaco, Jennifer Grey, Amber Riley and Alfonso Ribeiro, among others. This year’s acting celebs are Amber Rose, Maureen McCormick, Marilu Henner and Jake T. Austin.

Gold Derby readers just like YOU often turn out to be our smartest prognosticators, so it’s important that you give us your predictions. You can continue to update and change your forecasts throughout the week, just click “Save” when you’ve settled on your choice.

You’ll compete to win a $100 Amazon gift certificate, bragging rights and a place of honor on our leaderboard. Be sure to read our contest rules and sound off on the upcoming season of “DWTS” in Gold Derby’s reality TV forum.