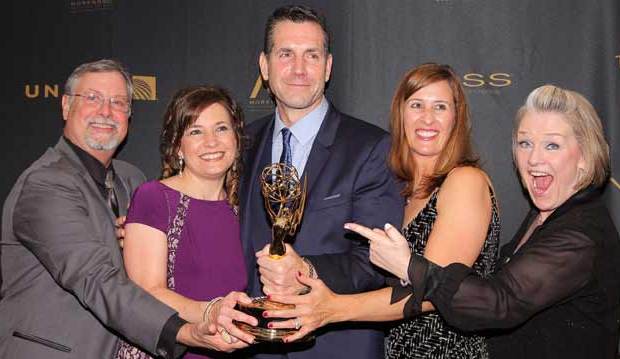 “General Hospital” was the big winner at Sunday night’s Daytime Emmy Awards. It won five prizes, including Best Drama Series. That was its 12th victory in the category — more than any other soap. Combined with its four wins at Friday’s Creative Arts Awards, “GH” finishes with nine awards total this year. Click here for the complete list of winners.

In addition to Best Drama Series, “GH” also claimed Best Drama Directing Team for the ninth time. And it swept through the male acting prizes, but Anthony Geary wasn’t the star who took Best Actor. The eight-time winner was upset by his co-star Tyler Christopher, who had never been nominated for Best Actor before this year and had never won an Emmy in any category. Best Supporting Actor was another surprise, with Sean Blakemore overtaking his “GH” co-star Dominic Zamprogna, while Bryan Craig won Best Younger Actor for the first time on his third straight nomination.

Interestingly, all of this year’s drama acting champs were first-timers. “Days of Our Lives” won a pair of acting prizes: Best Actress for Mary Beth Evans and Best Younger Actress for True O’Brien. This was Evans’s first nomination and win for her role on “Days,” but she is actually now a four-time Emmy champ. She won last year as a producer of the digital drama series “The Bay,” and she won twice more for that show at Creative Arts on Friday night: Best Digital Drama and Best Digital Drama Actress. In fact, Evans has never lost when nominated.

“The Young and the Restless” won the lion’s share of prizes at Creative Arts, but it had to settle for just one victory at the main ceremony: Best Supporting Actress for Jessica Collins (we raved about her episode submissions here). That brings its total this year to six.

But there were plenty of surprises outside the drama categories as well. “The Talk” won Best Entertainment Talk Show for the first time, upsetting the usually dominant “Ellen DeGeneres Show,” which has won the Talk Show prize nine times. But the hosts of “The Talk” (whom we chatted with last week to discuss their nomination) lost the Entertainment Talk Show Host race to repeat winners Kelly Ripa and Michael Strahan (“Live with Kelly and Michael”), who made headlines recently when Strahan’s upcoming departure from the show upset Ripa, who reportedly was not notified of his decision in advance.

“Extra” took Best Entertainment News Program, while “CBS Sunday Morning” prevailed as Best Morning Program for the third time in four years. One more victory will tie it with “Today” and “Good Morning America” as the most awarded program in the category.