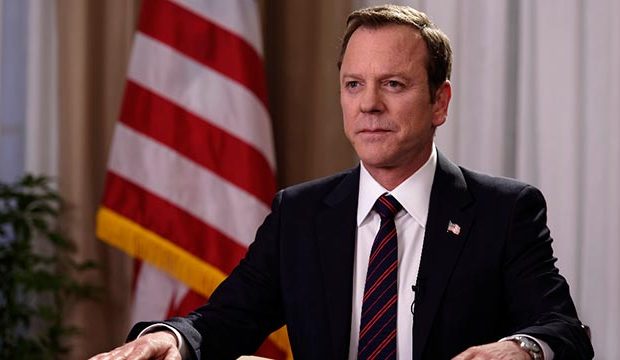 “Designated Survivor” premieres Wednesday night, September 21, on ABC. It’s a political thriller that follows Tom Kirkman (Kiefer Sutherland), the Secretary of Housing and Urban Development, who is suddenly thrust into the presidency after an explosion at the State of the Union address wipes out the line of succession. It could be an awards contender if the reviews are any indication. It has scored 72 on MetaCritic and 85% freshness on Rotten Tomatoes.

Sutherland is most famous for another political thriller: “24,” in which he played Jack Bauer, a federal agent fighting terrorism. That series earned him seven Emmy nominations for Best Drama Actor and another four for Best Drama Series as a producer. He won both categories in 2006. After “24” concluded Sutherland starred in “Touch” as the father of a boy who could predict the future; that series lasted two seasons from 2012-2013 but didn’t enjoy the kinds of awards success “24” had. Then he reprised his role as Jack Bauer in a comeback miniseries, “24: Live Another Day” in 2014, but that only picked up a trio of Creative Arts Emmy nominations.

Will “Designated Survivor,” created by screenwriter David Guggenheim (“Safe House,” “Stolen”) be an Emmy comeback for Sutherland? Check out some of the reviews below, and click here to join the discussion of this fall’s new shows in our forums.

Sonia Saraiya (Variety): “It’s annoying how good ‘Designated Survivor’ is. Annoying, because the topic is so ridiculously cheesy, and the emotions so deliberately over-the-top. And yet the concept is immediately engrossing, and the execution nearly seamless … This show isn’t going to be for everyone, but it comes with one of the highest-quality pilots broadcast is offering this fall, and it’s ABC’s strongest drama.”

Robert Bianco (USA Today): “With a little humor to lighten the tension, some well-placed quiet moments to keep the show grounded and a fast pace that keeps any seams from showing, ‘Designated’ arrives as the most satisfying opening hour of any new broadcast drama. But that doesn’t mean it won’t leave you with a few concerns for the hours to come.”

Vicki Hyman (Newart Star-Ledger): “Where will Kirkman, and ‘Designated Survivor,’ go from here? The show seems poised somewhere between a soaring, high-minded ‘Jeb Bartlett, the Early Years’ and the bone-crunching propulsion of ’24.’ That’s a mighty big space, and there’s a moment in the premiere that gives me confidence — when Sutherland’s Kirkman is thrust into the Situation Room before an assembly of nation’s (now) highest-ranking officials. He seems on the cusp of some decisive Jack Bauer-like impulse. He vomits instead.”

David Wiegand (San Francisco Chronicle): “Forget all the talk about whether there will ever be another ’24’ project with Kiefer Sutherland playing Jack Bauer. With the premiere of ‘Designated Survivor’ on Wednesday, Sept. 21, the only thing anyone will care about is having to wait a week for the next episode of Sutherland’s new show. There may be brainier series coming along this season, but it’s hard to imagine anything as gripping and flat-out fun to watch as this drama about a man whose life is suddenly and radically changed by events beyond his control.”

[POLL] Which TV President from 2016 would YOU vote for? Frances Underwood ('House of Cards), Selina…