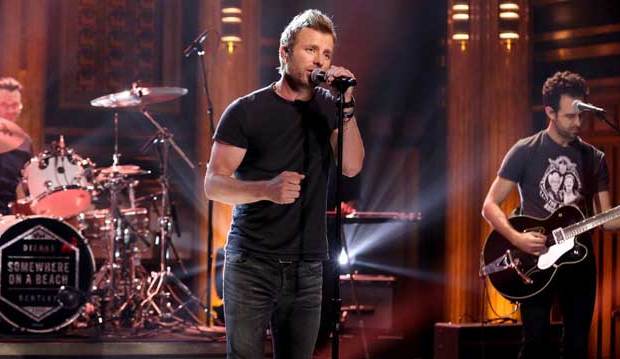 Country star Dierks Bentley‘s new album, “Black,” was released on May 27. It’s his eighth studio album. Will it finally win him a Grammy? He has never won a prize from the recording academy, but it’s not for a lack of trying. To date he’s been nominated 12 times, including Best Country Album in 2014 for his last effort, “Riser,” and Best Country Duo/Group Performance last year for “The Driver” with Charles Kelley and Eric Paslay.

Bentley’s 12 nominations place him ninth on the list of artists with the most Grammy nominations but no wins, tie with Diana Ross, Spyro Gyra and Busta Rhymes. The current record-holder is Snoop Dogg, who is still winless after 17 nominations, but as of now the only country artist with more nominations without a victory than Bentley is Martina McBride with 14.

It’ll be Beyonce vs. Adele at Grammys 2017 according to music guru Chris Willman

However, Bentley’s peers in the country music community have honored him. He won Video of the Year at the CMA Awards for “Drunk on a Plane” in 2014, he was named Top New Artist at the ACM Awards back in 2004 and at the CMT Music Awards he claimed Breakthrough Video (“What Was I Thinkin’,” 2004) and Performance of the Year (“Country Boy,” 2009).

Do you think Bentley will finally snap his Grammy losing streak? Read some of the reviews of “Black” below, then discuss all things music in our forums.

Glenn Gamboa (Newsday): “Dierks Bentley is on a roll … expertly weaving styles and storytelling tricks to build memorable tales to sing along with. ‘I dialed seven digits five times today, just to hear you say you love or hate me,’ he sings to open ‘Pick Up,’ probably the best-written country song this year.”

Stephen Thomas Erlewine (AllMusic): “Alternating impeccable midtempo anthems and soft ballads — the latter including duets with Maren Morris (‘I’ll Be the Moon’) and Elle King (‘Different for Girls’) — ‘Black’ winds up gelling into gently pulsing AAA-country. It’s mood music, sometimes playing as smooth as a seduction but better suited for moments of introspection when you’re surrounded by a crowd and need to isolate.”

Chuck Yarborough (The Plain Dealer): “It is a grownup album, with grownup themes, grownup lyrics and grownup performances, especially from Bentley with his pen and on the microphone … The album before this one, ‘Riser,’ was nominated for a best country album Grammy. This one will be, as well. And unless something really good comes out between now and then, it will win.”