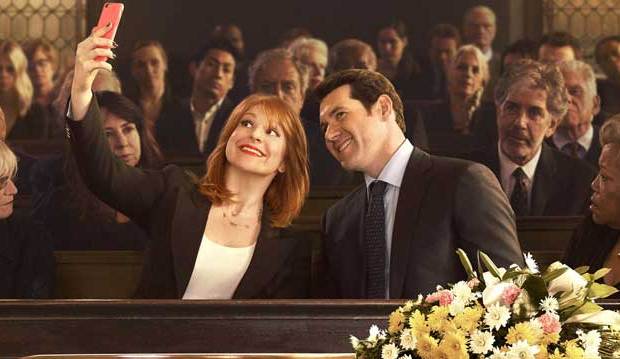 Julie Klausner created, produces and writes the Hulu series “Difficult People,” which premiered its first season on the online streaming service last summer. It’s set to return for season two on July 12. So what inspired her to make this show about frustrated comedians in New York City? “My shitty life,” she said with a laugh.

She was in New York on May 19 to discuss “Difficult People” with Emmy voters alongside showrunner Scott King and her co-stars Billy Eichner, Andrea Martin, James Urbaniak and Cole Escola. “One day I thought, would it work if I went back to the stuff I talked about in my podcast all the time?” Klausner added about the show’s inspiration. “Stories that ended with me being an asshole or someone else being an asshole to me, and use that as a point of departure to have stories to fill out this world.”

Emmy spotlight: Comedian Billy Eichner is double threat
for ‘Billy on the Street’ and ‘Difficult People’

But Klauser isn’t quite as aggressive as the version of her on the show. “Julie on screen is my id. She says things that I would never say. I’m not a very confrontational person. I tend to either cry or eat my feelings,” she explained. “[My character] confident about being right, and I like that that comments on the arrogance of people … when Billy and I were starting out there was a certain arrogance and bitterness that wasn’t considered attractive to show off. [We wondered,] ‘Why the fuck aren’t we more famous? We’re so funny!”

Klausner and Eichner have been working as comedians for a while, and the relationships they’ve developed over the years helped them land an impressive array of guest stars, including Martin Short, John Benjamin Hickey, Kate McKinnon, Ana Gasteyer, Fred Armisen, Amy Sedaris and more. Klausner added, “Seth Meyers played a gay male prostitute — you’re not going to see that on ‘Veep.'”

“Julie and I didn’t graduate college yesterday,” Eichner explained. “Our careers got going in our mid-30s, and a result of that is we were working and trudging away for years, writing for other people, getting to know people on the comedy scene, and people knew us – they weren’t employing us.”

“I was a ‘comedian’s comedian’ as opposed to a successful comedian,” Klausner explained, “which means people love and respect you but god forbid they call to give you a job.”

Emmy and Tony winner Andrea Martin plays Klausner’s mother. She signed on to the series because “the vision is so pure … The script was hysterical and the part was so great. I play a narcissistic mother – I’m a mother [in real life] and sometimes I think about myself, so that came easily.”

Urbaniak plays Julie’s levelheaded boyfriend, which he admitted was a change of pace: “I was thrilled first of all that Julie asked me to do it. In my career I tend to play oddballs, psychopaths, red herrings and perverts … [Now I play] a nice, supportive boyfriend to the unfiltered crazy person. That was in a weird way a stretch for me.”

Escola plays Billy’s co-worker and catty rival Matthew, but the actor believes the character is really an extension of Klausner: “The way Julie writes for Matthew, he’s like an old gay man, and I just feel like Julie is an old gay man.”

So now that they’ve filmed their second season, has success gone to their heads? Hardly, judging from Eichner’s experience on set one day when he encountered a passerby who said, “Oh yeah, that’s the Amy Poehler show that’s not ‘Broad City.'”

To that Klausner replied, “For your consideration!”